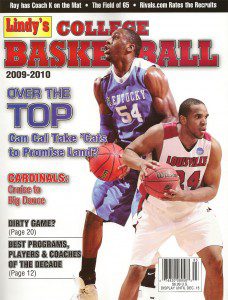 Picked up my issue of Lindy’s 2009-2010 college basketball preview today and wanted to share a few things from it.  One, of all the pictures of Patrick Patterson that have been taken over the last two years, you’d think they could have come up with something better than the one they chose.  Horrible.  Two, it says Calipari brings more baggage than Paris Hilton at Cannes but that’s okay…Kentucky fans have their issues too.  This comes after they rank Kentucky #8 in their preseason 25.  They make up for it somewhat by listing Darnell Dodson in their top 10 junior college player transfers and John Wall and Demarcus Cousins at #1 of the Best New Guys for 2009-2010.  But then listed Kentucky’s backcourt as #8 in the nation with no mention of Kentucky’s frontcourt in their top 10.  Lindy’s does pick Kentucky to win the SEC and selected John Wall and Patrick Patterson to their All-SEC team with Patrick Patterson picking up player of the year honors and John Wall picking up freshman of the year in the SEC.  Lindy’s does do a nice job of breaking down the conferences and unless you need it for that, save your money.