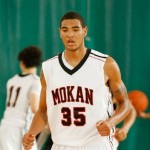 Since August began, John Calipari has watched his share of high school football games. Heck, he could give Joker Phillips some scouting reports from the gridiron and maybe even recruit for him (yes, UK fans would appreciate that).  However, his football players are top prospects on the hardwood, in particular Willie Cauley and Gary Harris.  Calipari flew to Kansas Friday night to watch Cauley’s Olathe-Northwest squad conclude its regular season.