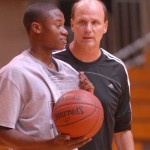 An announcement is expected shortly that assistant coach Vance Walberg has left the UMass men’s basketball coaching staff. The departure was believed to be amicable.  Walberg, a former head coach at Pepperdine, gained fame in the coaching ranks by designing the dribble-drive motion offense, a system that’s been utilized in professional, collegiate and high school ranks.  His offense became renowned largely due to the success of John Calipari.