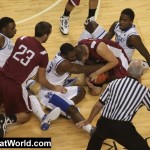 Complacency is a tough thing for a coach to guard against when his team wins big.  In case anyone missed it, John Calipari’s team housed Morehouse by 85 points in its final exhibition game Monday. Oddly, that result would make a lot of coaches think, “Uh oh.” It’s only human nature for one to puff his chest and close his ears after such a confidence-building rout, but Coach Cal isn’t overly concerned with how his team will react following its dominating performance.