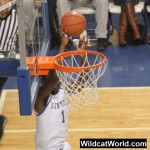 It wasn’t of the 85-point variety, but Kentucky opened its regular season on Friday with a relatively comfortable 50-point win in the aftermath of an ill-timed distraction.  Much more methodical in its blowout this time around, John Calipari’s Cats pulled away from a game Marist team in the second half on Friday, winning 108-58 in front of 22,079 fans at Rupp Arena. UK has won eight of its last nine season openers, but this one was a little more significant than the previous ones.