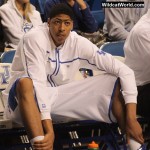 Anthony Davis has been selected by ESPN The Magazine as one of their five basketball finalists for their NEXT issue.  Every year, ESPN The Magazine unveils the NEXT Athlete as well as the NEXT class of five athletes who are the future in their sport and who will dominate the sports universe for years to come. Past stars include LeBron James, Jose Reyes, Alex Rodriguez, Matt Ryan, Kevin Durant and Candace Parker.  Davis is the second Wildcat in three years to be featured in the issue. Former UK All-American and overall number one pick in the 2010 NBA Draft John Wall was featured in the 2010 NEXT class.  Davis leads the team in rebounding (9.1) and blocked shots (36) and is third in scoring (12.3). He has consistently ranked in the top five nationally in blocked shots and is currently on pace to shatter the UK single-season blocks record. Additionally, he has an SEC leading three double-doubles already this season.  The 6-11 freshman narrowly missed the second triple-double in program history when he tallied a 15-point, 15-rebound, eight-block performance against St. John’s. And his heroics against fifth ranked North Carolina will go down in Kentucky basketball lore. With Kentucky leading by one point, Davis got his hand on a potential game-winning shot from John Henson and then gathered the rebound to help preserve the victory.  Fans can vote for Davis to be the NEXT basketball representative at www.ESPN.com/NEXT. Voting will be open until Dec. 18.