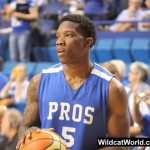 Clippers second-year guard Eric Bledsoe had surgery on a torn ligament in his right knee Oct. 7, the Clippers said in a news release Friday night after the team’s first practice.  At the time of the surgery, Bledsoe was scheduled to be out six to eight weeks. That timetable, which already is exceeded, puts him in line to return to practice pretty soon.  The Clippers were unable to announce Bledsoe’s injury sooner because the NBA prohibited teams from talking about players during the lockout.