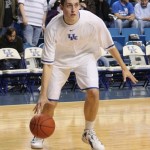 There are no classes. There is no limit on practice hours.  Between now and early January, John Calipari can do whatever he wants on the court with his Kentucky basketball team, can put his Wildcats through whatever paces he sees fit.  What he really wants is for his players to put in overtime on their own.  That’s why he’s particularly pleased with the “Breakfast Club,” a group of “four or five” UK players, Calipari said, who are meeting for early-morning weightlifting sessions then having their first meal of the day together.