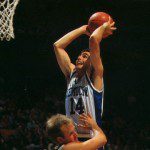 Jeff Brassow was born December 20, 1970.   Jeff was a four-year letterman at UK from 1990-94 and was part of the 1993 Final Four team that lost to Michigan. The definition of a role player, Brassow averaged 4.1 points and 1.9 rebounds in the run to the 1993 Final Four in New Orleans. His game-winning tip in the 1993 Maui Invitational against Arizona is still one of the hallmark moments of a blue-collared period of UK basketball.  Brassow scored 807 career points and grabbed 334 rebounds during his time in Lexington.  He has worked in Charleston, SC  for Metronic Inc. for the last nine years as a clinical specialist.  A father of two, Brassow said he still keeps up with the Cats on occasion on TV and on the Internet.