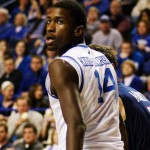 Admittedly, he was my first guess.  In Kentucky ‘s locker room last night reporters did their best to find out who the original “Breakfast Club” members were.  Seems it was something that Michael Kidd-Gilchrist had been doing on his own.  Coach Cal found out about it and suggested he invite his teammates to join him.  According to Kyle Tucker of the Courier-Journal, Kidd-Gilchrist said. “It’s at 8:30 in the morning. It’s just lifting and shooting (before breakfast). We just want to get better.”  The original members?  Terrence Jones, Jarrod Polson, Kyle Wiltjer and Anthony Davis, along with Kidd-Gilchrist.