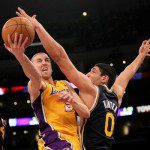 Enes Kanter – in his first ever game the big Turk came in and used his body well enough to grab 11 boards in a single game. Kyrylo Fesenko has only done that once before in his career, and same with Kosta Koufos. Both played major minutes in the games where they equaled that feat. Enes did this against the LA Lakers, and did it in barely 21 minutes. Yes, a number of those were offensive rebounds off of his own misses, but the kid did not quit.