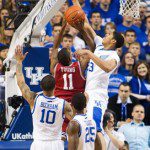 The freshman forward flirted with a triple-double Tuesday in No. 2 Kentucky’s 86-63 win against Arkansas at Rupp Arena, and the performance was met with what amounted to a collective yawn in postgame press conferences.   “I just looked at him and said, ‘You played good again’?,” UK coach John Calipari said. “(If) you can imagine, he does what he does every game. That’s who he is.”  Even for Davis, who’s making spectacular games routine, Tuesday was something special.