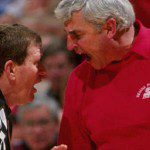 Indulge me for a second and imagine this was college football season. And imagine there was a team, late in the season, that was demonstrably better than almost everyone else, bearing down on a spot in the BCS title game. Imagine that team was, say, Alabama. And imagine it had the likely Heisman Trophy winner in, say, Mark Ingram.  And imagine the most famous college football analyst in America, when asked to name his top five teams and players in the country, refusing to mention the words “Alabama” or “Mark Ingram.”