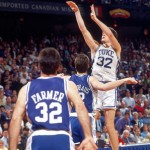 If you were to survey all the sporting events in which nobody died or was paralyzed, you’d be hard-pressed to come up with a better example of mass post-traumatic stress disorder than Big Blue Nation in the aftermath of Kentucky’s 1992 NCAA East Regional final loss to Duke.  Even today, 20 years after what’s widely considered the greatest college game ever played, Kentucky loyalists regard the Blue Devils’ 104-103 overtime victory, which ended with Christian Laettner’s last-second fallaway, as having touched off a collective psychotic break.