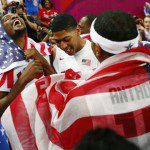 Although Anthony Davis has shared the court with some of the greatest basketball players in the world, he does not see himself as an NBA player quite yet.  “I just feel like a guy who’s just playing basketball right now,” the Hornets rookie and top overall draft choice said. “Until I play an NBA game, then I (can’t) consider myself an NBA player.”  With training camp opening next Tuesday, Davis stopped by the Saints’ training headquarters, which is now in the process of becoming the headquarters for the Hornets under new owner Tom Benson.  Davis brought his gold medal with him, and acknowledged his experience playing for the U.S. at the London Games should put him ahead of the NBA rookie curve.