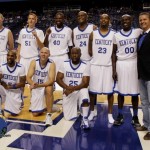 John Calipari has barely slowed down since New Orleans.  Winning a national title usually means there is a slew of requests and even more responsibilities from the school. There are awards to collect, speeches to give and recruits to chase after.  Every coach who wins a national title goes through this process.  But Calipari didn’t want to dial back his intensity one bit. In fact, he’s upped it.  “I’ve added a load of about 10 percent since we won,’’ said Calipari. “My pace is hectic now, and it’s in overdrive. I don’t want to be complacent.”  Calipari said he isn’t afraid to say no to the requests. And he’s attempting to create more balance, as he did Sunday. That’s when the Wildcats went through a team workout in the morning, and then he and his wife, Ellen, went and hit golf balls at a driving range.