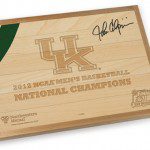 John Calipari-signed pieces of the 2012 Final Four floor Kentucky won its eighth national championship on will be available for purchase in an online public auction that starts Thursday.  Northwestern Mutual, which donated part of the 2012 Final Four to Kentucky for its use in its renovated Rupp Arena locker room, is making 300 additional pieces of the UK championship floor available for the auction.  One hundred percent of the proceeds will go toward the fight against pediatric cancer throughout the state of Kentucky. Specifically, the proceeds will benefit efforts at Kosair Children’s Hospital in Louisville and Kentucky Children’s Hospital in Lexington.  Starting Thursday at noon, the auction will be hosted at 2012UKFloor.com. The bidding, which will start at $500, will end the following Thursday, Oct. 18, at noon. The highest 300 will win the limited number of pieces. The site will notify bidders if they have fallen out of the top 300 bids.