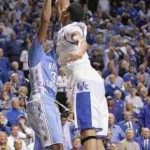 Jeff Goodman of CBSSports.com recently spoke to Dexter Strickland of North Carolina:  “I asked him whether he still thought about how everything might have been different last season if Kendall Marshall and he had been on the court for the NCAA tournament — and John Henson had been healthy as well.  “All the time,” he said. “I’ll be honest. If nobody got hurt, you might as well have given us the trophy. Nobody had the ability to stop us.”  I don’t agree it would have been a sure thing, but it certainly would have been one heck of a game that could have gone either way. Remember, Kentucky needed an Anthony Davis last-second block to take care of the Tar Heels earlier in the season at Rupp. ”