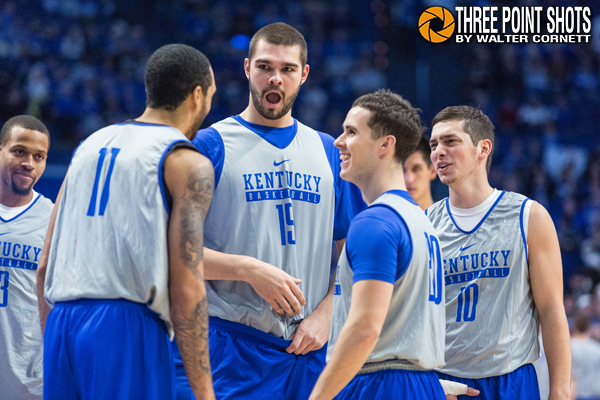 The upcoming season in Lexington looks like a promising one for the Kentucky Wildcats; one that potentially could end with a national title in Phoenix. This years ‘Cats have a lot of competition across the country, but this team is one of the best Calipari has had in his tenure as coach. Here are 3 predictions I have about the team and the players for this season:

The Wildcats Will Make This Years Final Four

This may or may not seem like a big claim. To people who watch college basketball casually, this can seem like a given. People who don’t watch college ball generally just assume the Final Four is always a mixture of Kentucky, Duke, North Carolina, Kansas, and a Cinderella team that somehow finds their way there. But it won’t be that simple this year seeing as teams like Wisconsin (who is returning all five starters from last year) and Villanova (the defending champions) are looking to become mainstays with the usual powers this year. It really depends how the tournament seeding works out and to what regions teams end up in. By that time, Calipari will have this team playing at full force as he has done with past teams. Even if the ‘Cats end up in a region that’s stacked with tough teams, I don’t think they’ll have very much trouble getting past them with the amount of talent they have, and the chemistry that will have been built by tournament time that will send this team to the next level.

The SEC Championship Will Be Won With Little To No Resistance

Kentucky will continue the trend of being the overwhelming favorite to win the conference and it’s tournament. The only teams that will even be a slight challenge to Kentucky’s dominance are the ever troubling Florida Gators and the Texas A&M Aggies who are projected to have a decent season  with many predicting they’ll end up in the top 25 at some point this season. Either of these teams may give the ‘Cats some trouble here and there but not enough to keep Kentucky from potentially having a perfect record in conference play. The regular season title may end up being clinched right around Valentines Day this year, which is something all Wildcat fans can love.

Players are already being tabbed as candidates to win some of the biggest awards in the country. Fox, Monk, and Adebayo are already up for awards for each respective position they play. Fox is on the shortlist for the 2016-17 Bob Cousy award which is awarded to the nations top point guard, Monk was named a candidate for the 2016-17 Jerry West award for the nations best shooting guard, with Adebayo being named as a candidate for the Kareem Abdul-Jabbar award given to the nations number one center. All three have good odds to win the awards they’re up for, and it wouldn’t surprise me if any of these three players become favorites to win the Naismith Player of the Year award, given annually to the nations top player.

None of these predictions are guaranteed to come true, but they all have good odds to come to fruition as the season wears on leading up to the NCAA Tournament and ultimately, the National Championship game. I wouldn’t be surprised if we see the Wildcats playing on the ultimate stage in Phoenix this coming spring, and you shouldn’t be either.