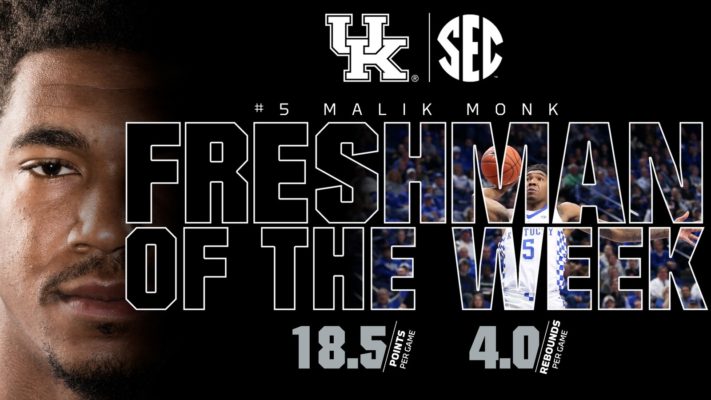 After a breakout performance in historic Madison Square Garden, Kentucky freshman Malik Monk hauled in Southeastern Conference Freshman of the Week honors on Monday. Monk was dynamic in UK’s victory over No. 13/13 Michigan State in the Champions Classic, draining seven 3-pointers en route to a career-high 23-point performance.

This marks the second consecutive week that a Wildcat has earned the league’s weekly honor for the top-performing freshman. De’Aaron Fox claimed the nod in the season’s opening week.

Monk averaged a team-high 18.5 points in the wins over the Spartans and Duquesne in Rupp Arena on Sunday.

Against the Spartans, Monk found his stroke and showcased his scoring ability in bunches. He scored a career-best 23 points, highlighted by a 7-of-11 (.636) showing from behind the arc. The seven made 3-pointers is the third-most in the John Calipari era. He’s also just one of three freshmen in program history to amass seven or more from long range in a regular-season, nonconference outing.

Monk didn’t just score against the Spartans; he was also a beast on the boards. The Lepanto, Arkansas, native hauled in a team-high six rebounds, the most of his young career.

It was more of the same for the freshman against Duquesne. Monk reached double-figures in scoring for the fourth time this season with 14 points, including two more 3-pointers. He also contributed a pair of rebounds and a block to the winning cause.

With the duo of Fox and Monk winning the league’s Freshman of the Week award in consecutive weeks, UK has now achieved the feat of capturing the honor in consecutive weeks to open the season for the second time in the Calipari era. Eric Bledsoe and John Wall opened the 2009-10 season with five straight accolades.