These Wildcats had strength, but they also had vulnerability. Oh, did they have vulnerability. To get to the 1998 Final Four they spotted Duke a 17-point lead and won. They went down 10 in the second half to Stanford the Saturday before that forcing overtime and prevailing 86-85 to reach the championship game. And at intermission during the NCAA Final game—down 10, outrebounded by 18, unable to hit a single three-pointer—they looked as if they had dug themselves one hole too many, but they rallied to wipe out the largest halftime deficit that any team had overcome to win a title game and came away with a 78-69 defeat of Utah. Therein lies a truth about this edition of the Wildcats: No collection of players in Kentucky’s recent run—the Duke teams of the early 1990s were the last to reach three straight championship games—has been more reliant on one another than the ’98 team. With so many good but not great players, none has more sorely needed to.  The three tournament rallies continued a trend of the entire season, when Kentucky trailed at halftime 12 times, and won 10 of those games. “We practice how to come back,” Kentucky coach Tubby Smith said. “That’s the big key. We teach them how to come back.” 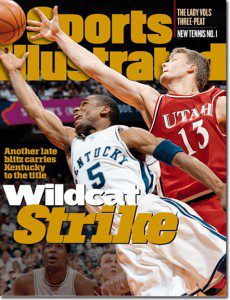