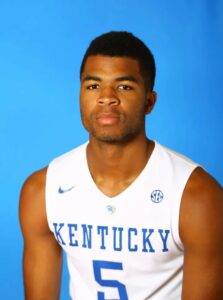 Andrew Harrison was born Andrew Michael Harrison on October 28, 1994, in San Antonio, Texas to Marian and Aaron Harrison. His twin brother, Aaron, was also a member of the Wildcats roster.

The Harrison twins began attending their father’s church league basketball games at age 4. They’d climb down from the bleachers at halftime and hoist as many shots as possible. Aaron Sr. tried to sign them up for a team when they were 7, but there was only one roster spot left in their age group. So he put them in a league with sixth-graders, and the team went undefeated. The twins’ most challenging games came against each other. Most summer days the thump-thump-thumping of basketballs began at 7 a.m. and continued into the night. Each basket was worth one point, and games sometimes reached 100. Most often they played until their mother, Marian, called them to come inside. Former NBA player and coach John Lucas began training the twins when they were eighth-graders. As freshmen, the Harrisons attended Strake Jesuit Prep, an all-male private school in Houston with about 800 students. Their father, who served in both the Army and the Navy, thought it would provide discipline and a demanding curriculum. The Harrisons transferred to Travis High the following year and were glad to be back home. As a junior at Travis, he averaged 12.5 points, 6.0 assists, 4.9 rebounds and 2.1 steals, while also helping guide his team to an appearance in the 5A State Championship game and a 36-4 record in 2011-12. Harrison logged 15.8 points, 7.0 rebounds and 7.0 assists as a senior at Travis where he directed the squad to a state title in 2013. Harrison was ranked as the top point guard in the country by all three recruiting services and the third-best prospect in the country by ESPNU Recruiting. Scout and Rivals both rank him as the fifth-best prospect. Harrison suited up for both the McDonald’s High School All-America and Jordan Brand Classic games.

On October 4, 2012, Aaron and his brother Andrew, in front of a packed gymnasium at their high school, verbally committed to play for Kentucky. They chose Kentucky over Maryland, SMU, Baylor, Kansas, and Arizona. They joined a recruiting class that was hailed as the most talented in the history of college basketball. It included Julius Randle, James Young, Dakari Johnson, Marcus Lee, and Derek Willis.

As a freshman at Kentucky, Harrison started 39 of 40 games played and averaged 10.9 points, 3.2 rebounds and 4.0 assists per game. He was ranked third in freshman single-season history with 159 assists on the season and finished the year with three or more assists in seven of UK’s final nine games. He was one of four UK freshmen to earn recognition on the preseason watch list for the Wayman Tisdale Award. He was also tabbed to the Bob Cousy Award watch list. Harrison was selected by the media as a preseason All-SEC second-team honoree. Harrison sat out UK’s two exhibition contests with a bone bruise in his right knee. On November 8, 20134, he tallied eight points and dished out a team-high five assists in a win over UNC Asheville. Harrison scored seven points and dished out six assists in UK’s loss to Baylor on December 6, 2013. On December 14, 3012, he had a career outing on the road at UNC, notching season bests in points and assists, scoring 17 points, and dishing out seven assists. Harrison delivered a season-best 18 points to lead Kentucky to a win over Louisville on December 28, 2013. He recorded 10 points, eight rebounds, four assists, and no turnovers in UK’s win at Vandy on January 11, 2014. On January 14, 2014, Harrison nailed a 3 with 1.2 seconds remaining in regulation to send UK and Arkansas into overtime. He scored a career-high 26 points, including going 10-for-10 at the charity stripe, in UK’s win over Tennessee on January 18, 2014. On February 14, 2014, Harrison led UK in scoring with 20 points, while grabbing four rebounds and dishing four assists against Florida. He recorded a career-high eight assists to go along with 11 points in UK’s win over LSU in the SEC Tournament on March 14, 2014. The next night he bested his career high in assists with nine to go along with 12 points against Georgia. On March 23, 2014, Harrison led UK with 20 points and added three assists en route to knocking off Wichita State in the third round of the 2014 NCAA Tournament. He tallied 14 points, five rebounds, and seven assists in UK’s Sweet 16 win over Louisville on March 28, 2014. Harrison dished out six assists in the Wildcats’ Elite Eight win over Michigan on March 30, 2014. Against Wisconsin in the Final Four on April 5, 2014, he notched nine points and four assists. In the NCAA title game against Connecticut on April 7, 2014, he allied eight points, five rebounds, five assists, and three steals.

As a sophomore, Harrison started all 39 games for the Wildcats. He became UK’s all-time leader in assists through the first two years of his career after registering a team-high 139 assists as a sophomore. Harrison averaged 9.3 points, 3.6 assists, and 2.2 rebounds per game and scored in double figures in 17 games, including five of his last seven games played. Harrison registered career-best totals in field-goal percentage, 3-point field goals, free-throw percentage, and steals. He led UK in scoring (10.1 points per game) and assists (3.4) in UK’s 10 games vs. ranked opponents. In the season opener on November 14, 2014, Harrison scored 16 points (7 of the game’s first points) and No. 1 Kentucky dominated Grand Canyon in every phase during an 85-45 blowout. Beginning their second straight season atop the rankings thanks to a 10-deep roster that coach John Calipari utilized through a two-platoon system, the Wildcats exploited their substantial height and talent advantages through both units against a young Antelopes squad featuring seven true or redshirt freshmen among nine newcomers. Harrison might have been the most under-appreciated player as a sophomore after being the most overly criticized player as a freshman on a team that eventually made the national title game. Harrison had 11 points, four assists, three rebounds, and one steal (and just one turnover) in 19 minutes in a November 25, 2014, 92-34 win over Texas-Arlington. On November 30, 2014, Harrison had a career-high four steals, with six points and four assists against Providence. He scored 11 points and added five assists and two steals against No. 21 North Carolina on December 13, 2014. On December 20, 2014, he had eight points and eight assists in the win over UCLA. Harrison poured in 15 points on 9-of-11 shooting from the free throw line at Missouri on January 29, 2015, to lead Kentucky as they improved to 20-0 for the third time in school history. On February 3, 2015, Harrison scored a season-high 23 points and just missed a double-double with seven assists to help lead top-ranked Kentucky to a 69-56 win over Georgia. The win kept the Wildcats undefeated at 22-0 and upped the Southeastern Conference record to 9-0 at the halfway mark of the league schedule. Harrison set a career-high with three 3-pointers and it marked the first time in his career he has produced more than 20 points and five assists in a game. His eight field goals also were a career-high. Harrison said the numbers came within the “flow of the game.” Against Tennesee on February 17, 2015, he logged 14 points, including a late-game steal and lay-in to put the game out of reach. Harrison notched 12 points and a career-high nine assists in the dominating win over Auburn at home on February 21, 2015 as No. 1 Kentucky exploded for a season-high 110 points. On February 28, 2015, he scored 18 points on a perfect 8-for-8 day from the charity stripe to help lead UK in an 84-67 dismantling of No. 18 Arkansas. The victory was noteworthy beyond earning the program’s 46th league title. Kentucky ended a three-game losing streak against the Razorbacks by beating them at their own high-speed, physical game, leading by as many as 31 points with 8 minutes left. He had 15 points, which included a career-high three 3-point field goals, in the SEC Tournament title game against No. 21 Arkansas on March 15, 2015. Harrison shot 44.8 percent overall, hit 6 of 11 3-pointers (54.5 percent), averaged 13 points, and dished four assists for every turnover in leading UK to the SEC tournament title. He was tabbed to the 2015 SEC All-Tournament Team. Harrison logged 14 points, four rebounds, and three assists in the first-round NCAA Tournament win over Hampton on March 19, 2015. On March 26, 2015, in the Sweet Sixteen, he posted 13 points, a career-high four steals, and two assists in the win over No. 20 West Virginia. On March 28, 2015, Harrison hit what turned out to be the winning free throws and then helped contest a potential game-winning shot Notre Dame missed as No. 1 Kentucky survived a huge scare to beat Notre Dame 68-66 in an Elite Eight matchup. The win put UK (38-0) back into the Final Four, where it would take on Wisconsin in a rematch of last year’s Final Four semifinal won by Kentucky. Harrison had 11 of his 13 points in the first half of the Final Four on April 5, 2015, against Wisconsin while also registering four assists. The Cats lost that one, 71-64. The 2014-15 Wildcats finished the season 38-1. Harrison was named to the 2015 Midwest NCAA Region All-Tournament Team.

On June 25, 2015, Harrison was selected with the 44th overall pick by thePhoenix Sunsin the2015 NBA draft. His rights were then traded to theMemphis Grizzliesin exchange forJon Leuer. He joined the Grizzlies for the 2015 NBA Summer League. After re-joining theMemphis Grizzliesfor the2016 NBA Summer League, Harrison signed a multi-year deal with the team on July 12, 2016. On November 30, 2016, he scored a career-high 21 points in a 120–105 loss to theToronto Raptors. He made his debut in the NBA playoffson April 15, 2017, scoring 10 points in just under 20 minutes off the bench in a 111–82 loss to theSan Antonio Spurs. On February 7, 2018, Harrison scored a career-high 23 points in a 92–88 loss to the Utah Jazz. A week later, he set a new career-high with 28 points in a 121–114 loss to the Oklahoma City Thunder. Harrison missed nine games in March 2018 due to a right wrist injury. OnNovember 1, 2018, Harrison was waived by the Grizzlies.