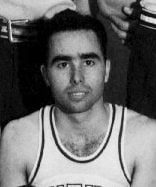 He was a retired merchant having been in business with his brother, Roscoe, who passed away Aug. 21, 1980 in the Davis Brother’s Hardware Store for the past 34 years.

The son of Sallie Davis and the late Karl Davis, he was a veteran of World War II.

He was a member of the First Baptist Church and was baptized May 29, 1960. He was an ordained deacon of the church on the missions committee since 1968, and served as superintendent of the Blue Grass Mission Sunday School for 11 years. A 1929 graduate of Hazard High, he attended the University of Kentucky where he played basketball under the late coach Adolph Rupp from 1932 to 1934, but later he left school due to the illness of his mother. He was rated among UK’s greatest basketball players and was given the name of “Little Bill Davis” by all the sportswriters, because at 5’11” he was the shortest of all Rupp’s players at that time. He was on the first SEC Championship team under Rupp as well as the first undefeated team under the Baron.

In 1980, he was one of the first four inductees selected by the Hazard Lion’s Club to be included in the Hazard High Hall of Fame for athletes.

Funeral Services were conducted Saturday Feb. 28, at the First Baptist Church in Hazard, Ky., by Rev. Herbert Jukes and Rev. Albert savage. Burial was in the Davis Cemetery at Christopher, Ky. The pallbearers and honorary pallbearers were all Deacons of the church.

Engle Funeral Home was in charge of arrangements.

Old-timers around the University of Kentucky basketball program were saddened to learn of the death of 70-year-old William (Bill) O. Davis, of Hazard. He died of a heart attack last Wednesday.

Davis, a retired Hazard merchant, lettered at UK in 1933 and 1934 and was chosen All-SEC in 1934, his last year at UK although he was only a sophomore.

Bill starred in the first-ever Southeastern Conference postseason tourney back in 1933 when UK routed Mississippi (49-31), Florida (48-24), LSU (51-38) and Mississippi State (46-27) to capture the first SEC tourney title as the Wildcats posted a fine 20-3 overall record.

The following year, when Davis won All-SEC honors with his uncanny shooting, the Wildcats breezed to a perfect 16-0 record only to be upset by Florida (38-32) in the first round of the SEC tourney. In those days, the season concluded with the SEC tourney as the NCAA had not yet been formed.

Davis left UK after his sophomore year, partially because he felt the late Adolph Rupp passed over him to pick a younger player as captain of the team for the next season. It was customary to pick a player with the most seniority.

During his retirement years, Rupp often remembered Davis as the finest shooter he had ever coached.

Years later, his brother, the late Roscoe Davis, confided that Bill was more homesick than anything else and returned to Hazard so he could marry his high school sweetheart, which he did.

He is survived by his wife, Opal Goins Davis. Funeral services were held last Saturday at the First Baptist Church in Hazard where he served as a deacon.