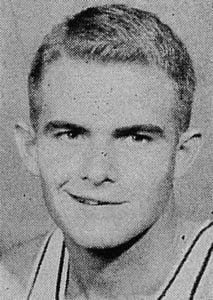 Richard Samuel Howe was born August 30, 1936, in Carbondale, Illinois.  Howe was a standout both as a basketball pivotman and grid end for four seasons at Carbondale Community High School in Illinois.  Howe was one of the best centers in southern Illinois his senior year and was the honorary captain of his 1954 Carbondale basketball team. As a senior, Howe led the team in scoring with 566 points and in rebounds with 238.  He also set a new Southwest Egyptian Conference scoring mark of 261 points.  Using his 6-5 height to advantage, Howe broke the conference scoring record by scoring 261 pints in 12 games, breaking the old record by 50 points.  His team’s record of 20 victories and seven losses was the best since the 1937-38 team which had a 26-5 mark.  In 1954, Howe scored 32 points against Anna-Jonesboro to smash the Southwest Egyptian Conference scoring record. The 6-5 ace was named to a first team berth on the All-Southern Illinois cage team and received honorable mention in the All-State balloting. In addition to his cage honors, Howe was nominated for football honors as All-Conference and honorable mention All-State. The versatile athlete was equally adept at either forward or center.  Dick paced his high school in scoring with a 24-point average and was the leading scorer on the grid squad.

Howe enrolled early at UK on scholarship in June of 1954.  He went to summer school in order to lighten his study load in civil engineering.

Howe was held out of action as a sophomore in order to preserve a year of eligibility.  A scrappy 6-6 pivotman, Howe showed exceptionally well in drills and “is too good a to be playing second string,” commented Adolph Rupp.  During recent practice sessions and shortly before the campaign opened, Howe displayed excellent promise and flashed signs of adequately filling the center spot the following year which would be vacated by Bob Burrow’s departure.  “He’s going to be in school five years anyway with that engineering course,” Rupp explained. “And might as well play during the seasons he’ll see the most action.”

He spent his remaining 3 years of eligibility as a reserve.  He scored a career high 10 points as a sophomore against Miami of Ohio on December 3, 1956.

Rupp said of Howe as a junior, “We have a real student in Dick Howe. He ended up with a 3.8 average out of a possible 4 in Engineering School.”

He was a member of the 1958 National Champion team.

Howe was vice-president of the UK chapter of the American Society of Civil Engineers in 1957.  He was also a member of the Delta Tau Delta fraternity and the Lamp and Cross.

Howe moved to San Antonio, Texas in 1976 and became a Professor Emeritus of Engineering after a 25-year career at the University of Texas at San Antonio.  There are several university service awards named in his honor.  In 2004, he helped found the Engineering & Technologies Academy (ETA), a public engineering-based magnet high school located at Theodore Roosevelt High School, in San Antonio, Texas.

Howe was inducted into the Carbondale Community High School Hall of Fame in 2016.

He and his wife Linda, who graduated from Seneca High School in Louisville in 1963, married in 1968.  They have two daughters, Beth and Kathy.