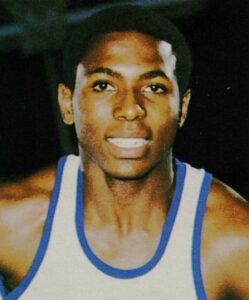 Richard Cornell Beal, otherwise known as Dicky Beal, was born September 18, 1962, in Covington, Kentucky to Helen James and Richard Beal.  The 5-9 guard played at Holmes High School in Covington, a team that boasted a 33-3 record his senior year.  On April 28, 1980, he was featured in the Sports Illustrated “Faces In The Crowd” section for leading Holmes High to a record of 33-3, a trip to the semi-finals of the 1980 state tourney, and a scholarship to the University of Kentucky.

In high school, Beal scored a career-high 50 points against Holy Cross on January 12, 1980.  Two days later, he announced he would attend DePaul, the same day DePaul jumped to first in the Associated Press’ college basketball rankings.  But on April 5, 1980, he announced he would attend Kentucky instead.  Kentucky assistant coach Joe Dean called Beal’s decision “great for our program.” He said Beal’s quickness would give the Wildcats’ offense a different dimension, allowing them to use the fast break more on offense.  He averaged 23.6 points, 6.5 rebounds and 8.3 assists while making 55 percent of his shots from the field and 68 percent from the free-throw line.  He joined Jim Master, Melvin Turpin and Bret Bearup in that year’s recruiting class.

In the 1980 East vs West All-Star game, Beal led the East All-Star team to a 96-90 victory over the West All-Stars at Louisville’s Freedom Hall.  He fired in 24 points, grabbed seven rebounds and handed out a game-high five assists.

He played at Kentucky from 1980-1984 and led the Cats to the SEC regular season championships in ’82, ’83, and ’84, as well as the SEC Tournament Championship in ’84. Dicky was voted the MVP of the Mid-East Region in 1984.  His 1983 team still holds the UK tournament record for FG% at .556.  His 14 assists against BYU in the 1984 Tournament are still the team high in the NCAA’s. In that same tournament he dished out nine assists and had six steals against Louisville, another UK tournament record. The Cats were cut short in their quest for the NCAA championship that year by Georgetown (I still vividly remember this game from my childhood).  Dicky is 15th on UK’s career assists leaders.

As a freshman at Kentucky, he played very well early in the season before suffering a thigh injury.  He played in 27 games, starting six and was second on the team in assists with 50.  He was also second in steals with 26.  He hit 44.2 percent from the field overall, 52.0 in SEC games.  Beal was selected to the All-UKIT team.

As a sophomore, Beal played in 29 games, starting one.  He averaged 3.3 points per game and was tied for second on the team with 54 assists.  He scored a career high 12 points against Auburn in the SEC Tournament and earned UK’s Sixth Man Award three times.

On August 26, 1983, the month before his 21st birthday and the start of his senior year, Beal underwent arthroscopic surgery, his third operation.  He missed all of the preseason conditioning program and was assigned his own exercise program to rehabilitate his knee and leg muscles.  His playing time was limited to several minute stints against Louisville, Kansas and other early-season encounters.  Gradually Beal progressed, until one day he decided to forsake any risk of injury and just went out and played. Against Auburn, he contributed 17 points off the bench and dished out 11 assists.  Against Florida, again, Beal was spectacular in leading the attack and was rewarded a starting nod for a trip to Nashville to face Vanderbilt, the first leg of a three-game road trip, 23 games into the season. Beal was the spark behind a late-season resurgence that culminated in a trip to the Final Four.

In UK’s last 11 games of the season, Beal scored 107 points (9.7 ppg.) and handed out 80 assists.  He hit 38 of 63 shots from the field (60.3%) and, 31 of 39 shots from the line (79.5%).  His two free throws at the 0:03 mark enabled UK to defeat Alabama 48—46 in the semi-finals of the SEC Tournament. His 14 assists against Brigham Young in the NCAA Second Round tied the Kentucky school record and there have only been six Wildcats to dish that many assists in a game (Sahvir Wheeler, John Wall (twice), Tyler Ulis, Travis Ford, and Dirk Minniefield).  In the NCAA Mid-East Regional final against Illinois, coming off a time-out with under a minute to play, Beal took the ball and dribbled around the perimeter killing clock. He saw an opening down the left side of the lane, took it and squirted in for a lay-up to put UK up for good.  With about 16 seconds left to play, Beal sank two free-throws to clinch a 54-51 win and he was voted Mideast Regional MVP.

“It’s an awesome feeling,” Beal said in the jubiliant Wildcat lockeroom after the win over Illinois.  “It’s something we’ve been working on for four years. It makes all the pain and all the hard practices worth it all.”

All these years later, Beal says this is his favorite memory from his time at Kentucky.

“Dicky’s had the toughest time, including Same Bowie of any player I’ve ever coached,” said UK head coach Joe B. Hall. “He’s had the potential to be the catalyst all this time and to see him do the things he does so well is very pleasing to me.”

The most important contribution Beal made, however, cannot be measured in numbers. Beal added energy and enthusiasm.  For whatever reasons, whether the players had quiet personalities, or the pressured atmosphere stifles any outward emotion, some of Kentucky’s proudest moments have taken on a grim appearance.  “I thought we needed somebody out there that can jump up and down and say, ‘Hey, it’s not over,”‘ Beal said. “When there’s five minutes left, jump up and down and say, ‘Just five to go.’ Then with two minutes, ‘Just two to go.’ It’s something that we needed. “The little man, you’ve got to be that way,” Beal said. “You can’t rebound, you can’t block the big man’s shots. You’ve got to do something else. That’s my role, to get us fired up.” Beal just took over. When a teammate complains that he does not have the ball often enough, Beal answers sometimes less than diplomatically that there are others to consider.

“He’s going to wind up an immortal here at Kentucky,” said Joe B. Hall, who does not say such things very often.

To this day he acknowledges: “I’m so proud to be a Holmes Bulldog and a Kentucky Wildcat!  Two basketball powerhouses that stand the test of time. God has blessed me!”

Beal was drafted in the fourth round of the 1984 NBA Draft by the Atlanta Hawks but knee injuries prevented him from enjoying a professional career.

In 2017, Beal was inducted into the Buddy LaRosa high school Sports Hall of Fame which recognizes outstanding athletes from Cincinnati high schools.

In 2018, Beal was inducted into the Holmes High School Athletic Hall of Fame.

If one’s value to a team is measured by how well one plays his assigned role, Dicky Beal would no doubt garner some votes for MVP.  The 5-11 guard from Covington has become more comfortable each game in his role as the spark, the catalyst, the man Coach Joe B. Hall can count on to push the ball down court quickly and penetrate a tough defense. He is an exceptional ball handler, a press breaker and already a crowd favorite.

“When I go in and the crowd’s behind me hollering, it gets me going, gets the glow going,” Beal explains, “When I touch the ball I just want to go as fast as I can, get it down the court and try to get it to somebody who can put it in for a layup. With 23,000 behind you, you can’t go wrong.”

A three-year starter at Covington Holmes, Beal averaged 24 points per game in leading his team to the Ninth Region championship and the state tournament. He is also an
excellent leaper who can dunk with either hand.  But it is his assists that get the Rupp Arena crowd jumping and his teammates hearts thumping in anticipation of easy layups and end-to-end action. He goes on instinct.

“I’ve been playing like that all my life,” Dicky was saying after a recent victory. “l never try to do anything spectacular, I just try to get it to the open man. Because of the way I do that, I guess it looks fancy. But I don’t try to be fancy.”

Unlike many shorter guards, Beal dosen’t bristle at being labeled a “small” man.  “Well, you ARE the little man when you are out there with players like Sam and Bret. There’s no other way you can put it.  I build my confidence up taking the ball down the lane against the big men.  I know because of my size, I can’t be shooting over people.”

“I’m in the learning process right now, getting to know the system, the coaching staff. Right now, I’m just trying to learn anything I can.”

And what about Dickey Beal off the court? He is a good student who is going through the same adjustments any freshman goes through.

“l just like to have fun, I like to meet people, to talk to them and see what’s on their mind. Once I came down here, I got kind of scared to say something to people because I didn’t know them. I am starting to know everybody now and starting to joke around and be the best of friends.”