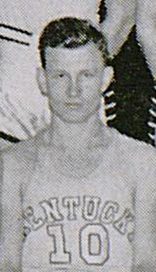 Mr. Head had been with the Farmers & Traders Bank for 12 years, and was appointed president on January 14, 1969.

Before he joined the bank, he was principal and basketball coach at Shelbyville High School for 14 years. From 1934 to 1938 he played basketball under Adolph Rupp at the University of Kentucky.

During World War II Mr. Head served in the special athletics unit of the Marine Corps, and in 1945 was voted outstanding athlete on the West Coast while playing basketball with the Marines.

He had been principal and basketball coach at Irvine High School from 1938 to 1943; former president of the Shelbyville School Board and a member of the First Christian Church of Shelbyville.

Mr. Head was a native of Stamping Ground and a son of the late Burra and Rebecca Curtis Head.

Mr. Head kept abreast of the latest and most modern banking methods and conducted the business of the bank in a progressive and efficient manner. He possessed an old world courtesy and the friendships he made were lasting. His sudden death brought sorrow to not only those in the banking profession but throughout the entire community.

funeral services were conducted at 2 p.m. Saturday from Shannon Funeral Home by the Rev. J. Edward Cayce. Burial was in Grove Hill Cemetery.

Honorary pallbearers were Bank directors, Ralph Mitchell, attorney for the Bank, and employees.