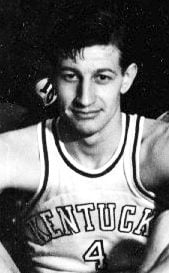 Herbert Jerome was born Herbert Elliott Jerome on September 26, 1910, to Daisy and Calvin Jerome.  Jerome graduated from Tulsa Central High School in 1929 and attended the college of engineering at the University of Kentucky.  He earned the nickname “Slip” because of his speed as a starting forward on the freshman squad at Kentucky.  He led that squad in scoring.  Jerome scored 15 points in a 43-18 win over Cumberland College on January 9, 1933.  He scored 14 points in a 65-10 win over Lees College on February 7, 1933, and scored 16 points in a win over Central City on February 10, 1933.  He scored 10 in a 37-32 win over unbeaten Eastern State on February 15, 1933.  “Slip”  Jerome, according to “Aggie” Sale, was the greatest passer to play on the Kentucky floor since he had been in school. He also said he was a good defensive man and was as good on the offense.  Adolph Rupp said of Jerome, “He has had a lot of experience in playing basketball, is a great passer, a good shot and very deceptive in his foot work. He ought to be among the first three men playing the forward position.”  Jerome was a sophomore member of the 1933-34 team that piled up a brilliant record of 24 consecutive wins to tie the record set by Duquesne University.  The Wildcats entered the Southeastern Conference tournament as the top-heavy favorites but were upset in their first game by Florida.  He saw action in 13 games as a sophomore and scored 46 points for the season for an average of 3.5 points per game.  He transferred to Rice Institute in Houston, Texas after his sophomore season to complete his education.  He went on to work in the engineering department of Mid-Continent Oil Corporation in Tulsa, Oklahoma.  Jerome married Ethel Copenhagen in Tulsa, Oklahoma on August 19, 1938, in Tulsa.