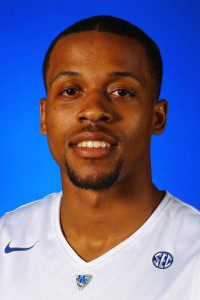 High School: A 2015 USA Basketball U19 Team selection … Was named a USA Today All-USA First Team selection and a Parade Magazine All-American … He also participated in the McDonald’s All American Game and the Jordan Brand Classic … Helped Team USA to a gold medal at the 2014 FIBA Americas U18 Championship … Also suited up for the USA at the 2015 Nike Hoop Summit… Led team to its second consecutive state Non-Public B championship, averaging 20.8 points, 5.5 rebounds and 4.0 assists as a senior … Averaged 22.1 points, 4.0 assists, 3.9 rebounds and 1.8 steals per game during his junior season … Last summer, he helped lead the New Jersey Playaz to the title in the Nike Elite Youth Basketball League … His father, George Briscoe, played basketball for Stockton College and is in the school’s Hall of Fame … His sister, Iasia Hemingway, played basketball at Georgia Tech and Syracuse and plays professionally overseas … Ranked the No. 9 overall player by Rivals and 247Sports.com, the No. 13 overall pick by ESPN and the No. 15 overall player in the class by Scout.