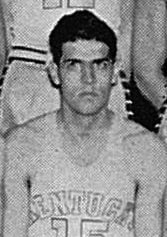 J. Rice Walker, 43, a former University of Kentucky basketball star, died yesterday morning apparently as a result of injuries received in a fall.

His body was found about 7:30 a.m. yesterday in a cottage on Lake Cumberland near Russell Springs. He apparently had fallen down a flight of steps in the cottage.

A native of Lexington, he was a son of the late J. Rice and Mary Wether Walker. He attended Henry Clay High School and was graduated from the University of Kentucky.

He was an Army veteran of World War II, having served with the infantry for two years in Italy. He was a member of the Central Christian Church and a former insurance executive in Lexington.

The body will be brought to the W.R. Milward Mortuary – Broadway.