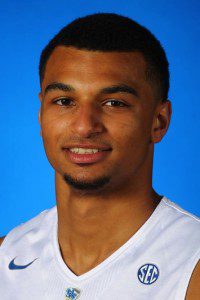 High School: Originally a member of the 2016 recruiting class but reclassified to the 2015 class … As a member of the 2016 class, he was rated a top-15 prospect by nearly every recruiting service and tabbed a consensus five-star recruit … Stock began to soar following a breakout performance at the Nike Hoop Summit against the USA Basketball Team where he scored 30 points, prior to a 29-point, 10-assist, eight-rebound effort in the BioSteel All-Canadian Basketball Game … He was named the most valuable player in both games … Ranked the No. 10 overall player in the updated 2015 247Sports rankings and No. 12 in the 2015 Scout rankings … Prior to his reclassification, he was ranked the No. 15 overall recruit in the 2016 class by Rivals … Was a standout performer for his native Team Canada during the 2015 Pan Am Games … Averaged 17 points and 2.4 assists per game throughout his first four games … Against the United States, Murray poured in 22 points – all coming in the fourth quarter or overtime – and added six assists in a triumph over the Americans to send Canada to the Pan Am Championship game.