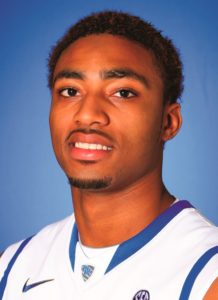 James Young was born August 16, 1995 in Flint, Michigan to Tiplance Vernon.  He first picked up a basketball at 3 years old while living with his mother in Rochester Hills.  Young attended both Troy High School in Troy, Michigan, and Rochester High School in Rochester Hills, Michigan. As a junior at Troy in 2011–12, Young averaged 25.1 points, 10.5 rebounds, 4.5 assists and 2.5 steals per game, earning first-team All-State honors from the Associated Press, Detroit News and Detroit Free Press.  As a senior at Rochester in 2012–13, Young averaged 27.2 points, 16.0 rebounds and 5.7 assists per game, going on to earn McDonald’s All-American honors.  Considered a five-star recruit by ESPN.com, Young was listed as the No. 3 small forward and the No. 8 player in the nation in 2013.  He appeared in both the McDonald’s High School All-America and Jordan Brand Classic games.

On October 11, 2012, Young signed a letter of intent to play college basketball for the University of Kentucky over Michigan State, Arizona State and Kansas.  Young joined an incredible freshman class at Kentucky that included five of the top nine national recruits. That crop of freshman wound up pushing the Wildcats to the NCAA championship game, though they fell to UConn.

His welcome-to-college moment happened at the United Center in Chicago in the third game of the season when the Wildcats took on top-ranked Michigan State in front of 22,711 fans. MSU was one of the main programs pushing for Young in high school, but he seized the opportunity to drop 19 points on the hometown team. MSU held on to beat Kentucky 78-74 but at that moment Young felt he had officially arrived on the college scene and all the butterflies were gone.

As a freshman at Kentucky in 2013–14, Young finished second in UK single-season freshman history with 82 made three-pointers on the season. He was named SEC Freshman of the Week two times, earned second-team All-SEC honors, SEC All-Freshman team honors, and was named to the Final Four NCAA All-Tournament team.  In 40 games (39 starts), he averaged 14.3 points, 4.3 rebounds and 1.7 assists in 32.4 minutes per game.  Early in the season, on November 19, he scored a career-high 26 points and hit five three-pointers in a 105–76 win over UT Arlington.  He appeared in all 40 games and made 39 starts.  Young scored a team-high 20 points and pulled down seven boards in the National Championship vs. Connecticut. He led UK in scoring with 17 points to go along with five rebounds as the Wildcats took down Wisconsin in the Final Four. He was among watch list candidates for the Wayman Tisdale Award.

On April 17, 2014, Young declared for the NBA draft, forgoing his final three years of college eligibility