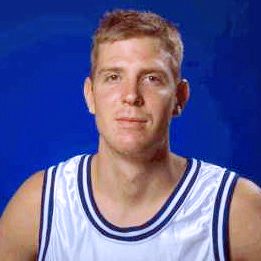 Jared Prickett was born Jared Bradley Pickett on November 14, 1973, in Fairmont, West Virginia to Don and Linda Prickett. He has two siblings: Jason and Brooke.

In high school, Prickett was West Virginia’s 1992 high school Player of the Year. He led Fairmont West to its first undefeated regular season, a 28-1 overall record and a runner-up spot in the Class AAA ranks. Fairmont West was ranked No. 1 virtually the entire season but was upset by Beckley Woodrow Wilson in the state title game, 79-59. Prickett led the Polar Bears in scoring (19.2) rebounding (14.6) and assists (10.0) and was chosen captain of the Class AAA All-State team. His career high was a 32-point outing against South Charleston in the West Virginia State Tournament. Prickett scored 1,184 points in his career at Fairmont West. As a junior, he averaged 17.1 points, 8.2 rebounds, 6.5 assists and 3.0 blocked shots per game.

Prickett committed to UK shortly after attending the 1991 Big Blue Madness in October of 1991, along with Rodrick Rhodes, Tony Delk and Walter McCarty. He chose Kentucky over Notre Dame. Prickett was a player Kentucky anted because of his versatility. He could play more than one position and also had the shooting range and stamina for Kentuck’s fast-paced system.

As a freshman at Kentucky, Prickett played in all 34 games and started nine of the last 10. He was named to the NCAA All-Southeast Regional team for his 22 points, 11 rebounds and 3 assists against Florida State. On March 3, 1993, he tallied impressive numbers — 11 points, 10 rebounds, 5 assists, 5 steals, 0 turnovers, 5-for-7 from the field — against Ole Miss. Prickett recorded three “double-doubles” (double-figure scoring and rebounding), including a 15-point, 13-rebound effort against Arkansas on February 10, 1993. He scored in double-figures seven times and averaged 5.5 points per game and 4.6 rebounds per game. He played for the South team in the 1993 U.S. Olympic Festival and averaged 14.5 ppg and 9 rpg.

As a sophomore, Prickett played in 33 games, starting 25. He scored a season-high 18 points against Ole Miss on January 12, 1994 and grabbed a career-high 20 rebounds against Arkansas, February 9, 1994. Prickett earned Player-of-the-Game accolades five times and had four double-double games (scoring and rebounding in double figures), He scored in double figures a total of 12 times. Pricket had 17 points and 15 rebounds against UMass, and three days later followed with an 11-point, 20-rebound performance against Arkansas. He was 8-of-10 from the field against Ole Miss.

As a junior, Prickett was awarded the Reggie Hanson Sacrifice honor by the team for effort during his sophomore campaign. His best outing came against UT-Martin with 21 points and eight boards while earning Player-of-the-Game accolades. Prickett also earned top player honors Against Florida, Tennessee and Tulane. He played in all 33 games, earning five starts. He finished third on the squad in rebounding, averaging 4.8 RPG. He missed every practice leading up to the Italy tour due to rehabilitation after surgery.

Prickett underwent knee surgery to have a bone growth removed in June of 1995. The injury occurred during practice his junior season when he collided first with Rodrick Rhodes and then Scott Padgett on separate occasions during the same week. He was awarded a medical redshirt for 1995-96.

As a redshirt senior, Prickett was chosen co-captain for the 1996-97 season. Overall for his career, Prickett broke a 48-year-old UK record for most games played with 143 and he was a member of three Final Four teams, playing in two. He led the team in rebounding as a sophomore and senior and finished with 998 points, two shy of the 1,000-point club. Prickett earned SEC All-Tournament team honors as a senior and made the Southeast Regional All-Tournament as a freshman, after tallying 22 points and 11 boards against Florida State in 1993. He missed all but five games of the 1996 season after a calcium growth was removed from his left knee. He had a career-high 20 rebounds against Arkansas in 1994 and recorded nine double-doubles in his career.