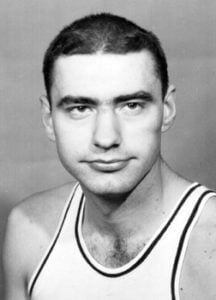 Jay A. Bayless was born September 22, 1933, in Knoxville, Tennessee to Carter and Fairie Bayless.  His father, Carter, worked as a line type printer in Lexington.  The former Knoxville schoolboy standout held, among his many high school honors, the Tennessee discus throw record, set in 1954, with a distance of 147 feet and 8.5 inches plus earning All-State mention in both basketball and football.  In high school, he was described as a “wild-scrambling terror under the boards.”

Bayless was offered a football scholarship at Tennessee.  He declined and said he was waiting to see if he could play basketball at Kentucky.   He persuaded Kentucky to send Harry Lancaster, Rupp’s assistant coach, to scout him, in hopes that he could get a scholarship.  Lancaster watched Bayless hit 12 of 20 shots for a season high of 28 points.  Adolph Rupp made it his highest ambition to get an All-America basketball player for Kentucky out of Knoxville.  He got his wish when Bayless signed a grant-in-aid with Kentucky on January 30, 1954.  Lancaster said of Bayless, “Jay is a big boy, he has speed and can shoot exceptionally well. I definitely feel that he is a good college prospect and I believe that he’ll be a big help to us before long. He is already as big as Cliff Hagan and is still growing.”

“I’ve always dreamed of playing basketball at  Kentucky,” Bayless said.  “I’m proud that Coach Rupp and Coach Lancaster think enough of me to give me an opportunity to realize this ambition and I’m going to do my best to make good at Kentucky and repay their confidence in me.”  He was part of a recruiting class that included Vernon Hatton, Ed Beck, and Phil Johnson.

Commissioner Bernie Moore ruled him a transfer student and ineligible to compete his freshman season.  A couple of days after graduation from high school in Knoxville, Bayless enrolled for summer school at a junior college near his home. He had already decided to attend Kentucky and been granted a basketball scholarship but drew notice from his draft board for an immediate call if he did not continue in school.  He remained in the junior college only a week or so until the summer term began at UK but that was long enough for Moore to rule he was a transfer student. Had he attended UK any time previously, he could, of course, have spent the entire summer at the other school and still been eligible for immediate competition as a freshman when he returned to the University.

Bayless played only one season at Kentucky.  He played in two games in December of 1956.  He also lettered in track.

Bayless graduated from UK in 1958 and began teaching and coaching track in Knoxville.