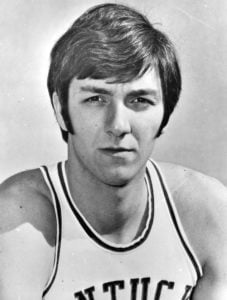 One of the most unsung, underrated Kentucky Wildcat players of all-time is 6’11” center Jim Andrews, who played for the ‘Cats from 1970 to 1973.  He is one of only five players to have played under both coach Adolph Rupp and coach Joe B. Hall.  Originally from West Virginia, but later recruited out of Lima, Ohio, Andrews was a highly skilled big man and one of the top rebounders in UK history.

Jim Andrews was born September 1, 1951.  He spent his sophomore and junior years of high school playing in Centerville, Michigan. In the spring of Andrews junior year, his father, a salesman, moved the family back to Lima, where it had originally lived. John Ellis, the coach at Lima Bath High School, was the beneficiary of this stroke of good fortune.  Ellis had seen Andrews play as a freshman at a township school outside Lima.  “The first time I saw him I felt he had tremendous potential,” Ellis said.  Ellis installed Andrews at center. He averaged 33.4 points and 18 rebounds a game as a senior with a 26-point and 20-rebound average over the three years of his prep career.  Andrews broke the school record for most points (50) and most rebounds (27) in a single game.  He originally broke the school record for most points in a game (37) by scoring 41 points on November 30, 1968 but followed that up two weeks later with a 50-point performance.

Kentucky coach Joe Hall discovered Andrews by accident when he was Rupp’s top recruiter. Hall was going to Findlay, Ohio, to watch another player when he stopped in Lima to get gasoline and was told by a worker there about a “big guy who averaged 36 points and 22 or 23 rebounds a game” playing in town, according to what Hall told Andrews and others.

“He came and watched me play that night,” Andrews said. “Joe told me he could not even remember the name of the kid he originally was going to Findlay to watch that night. I really don’t remember if he offered me a scholarship that night or later but he did invite me to come watch Kentucky play Tennessee. I was actually considering going to Tennessee to play but I liked the up and down style Kentucky played a whole lot more, so I came to Kentucky.”

Andrews signed his grant-in-aid to play for Kentucky on March 17, 1969.

Andrews led the freshman team with 28.4 points and 13.8 rebounds per game, hitting 55 per cent of his shots.  His season high was 43 points against Alabama.

As a sophomore, Andrews was touted to become one of the all-time greats at Kentucky, possessing good height complemented by a strong (225 lbs.) frame and good hands.  He moved well in the pivot and had an excellent medium range jump shot which also made him a definite threat at forward.  Five games into the season, he had only played 14 scoreless minutes, then came December 22, 1970.  Andrews dropped in 19 points as Kentucky defeated previously unbeaten Oregon State 84-78.  The  victory was the Wildcats’ sixth in seven games, but they had to overcome a seven-point deficit to get it.  During his sophomore year, he was the team’s sixth top scorer with 156 points, averaging 6.5 and 5 rebounds. He played 306 minutes in 24 games, hitting 52.5 per cent from the field.  He was high scorer with 19 against Oregon State and was high rebounder three times.  He played well in the NCAA Mid-East Regional, scoring 22 points and 1 1 rebounds.  He was named to the All-Sec Sophomore second team.

Just two weeks away from his first game as a junior, Andrews sprained his ankle badly enough that it had to be put into a cast.  He was out for about 10 days.  “Andrews has made more progress at center this year than anyone we’ve had in a comparable amount of time,” said Rupp.  “He learns rapidly and we’re trying to pattern him after Dan Issel, to teach him the same moves and shots.”  Filling the large shoes vacated by the departure of 7-2 center Tom Payne to the pros may have been a large order for Jim Andrews but he at least passed the test in UK’s opening-night 94-85 win over Northwestern.  Andrews used his size well and scored 37 points in the UK victory before 11,500 at Memorial Coliseum. He made 14 of 18 short-and medium-range field goal tries and nine of 10 free throws.  As a junior, Andrews was the team’s top scorer with 602 points, placing him second in the SEC in a season that the Cats went 14-4 and what turned out to be Rupp’s last as head coach.  He broke a school shooting record held by Dan Issel by hitting 57.7 percent from the field and was the team’s leading rebounder with 11.3 per game.  He was named first team All-SEC and All-NCAA Mid-East.  Andrews scored more than 30 points in five games, and 20 in 10.  He started all 28 games, averaging 21.5 points, 1 1.3 rebounds, and second in time played.  He placed third with 70 assists and finished second in SEC scoring and field goal accuracy, and fifth in rebounding.  Following his junior campaign, Joe B. Hall said of Andrews, “Jim has the quickness, jumping ability and shooting touch to become the best center in the country.  With increased motivation and sustained effort, he could lead Kentucky to a great season.”

All players have their quirks and superstitions.  Andrews was no different. “I have a series of little routines—you might call them superstitions-that I do before a game,” Andrews said.  “Maybe it’s bad to say it, but I never take a shower the day of a game.”  And true to his Ohio background, Andrews, has another little quirk. He keeps “my little Buckeye in the right-hand pocket of my jacket” for luck.  The pre-game rituals are that he never bathes, but always shaves, trims fingernails or toe nails; seeks out the same people to talk with and avoids girlfriend Teri Kennedy.

As a senior, Andrews was the team’s top scorer with 562 points.  He was again named first team All-SEC and All-NCAA Mid-East.  He helped lead Kentucky to a record 21st NCAA Tournament appearance dating back to 1942 and its first without Rupp.  He scored 30 points and snagged 14 rebounds against Austin Peay in the NCAA tournament opened then 23 points and 10 rebounds in a loss to Indiana in the NCAA Mid-East regional final.  At seasons end, Andrews received the Most Valuable Player trophy, as well as an award for being the outstanding senior.  He led UK with 20.1 points and 12.4 rebounds as a senior.

In his three years with Kentucky, the ‘Cats posted a 63-21 mark, with Andrews scoring 1,320 points (29th all-time in UK history) and grabbing 783 boards (t15th all-time) — Andrews made 1st Team All-SEC in both his junior and senior years.  Proving he was a clutch player, Andrews was named All-NCAA Regional twice (’72, ’73).  Andrews posted — get this — 43 double-doubles in his career (three his sophomore season, 19 his junior year, and 21 his final season).  As a matter of fact, Andrews averaged a double-double both his junior and senior years — 21.5 and 11.3 his junior season, and 20.1 and 12.4 his senior year.  An excellent shooter, Andrews made over 56% of his shots from the field in both of his final two years with Kentucky.  Currently, Andrews’ 56.3% career field goal percentage ranks 13th in the UK record books.

He was the last UK player to average 20 or more points and 10 or more rebounds over two seasons — something only Issel, Cotton Nash, and Hagan have ever done. Over the last 50 years, only Andrews, Kevin Grevey, Walker and Jamal Mashburn have averaged 20 or more points in two seasons. The Cats won three SEC titles with him at center and made the Elite Eight twice.

Andrews was also a member of the Delta Tau Delta fraternity wile at UK.

Andrews was drafted in the 7th round of the NBA draft by the Seattle Supersonics (now, Oklahoma City Thunder), but instead went to Italy and played several years.  He later was a para-professional on the UK staff, and helped develop big men Rick Robey, James Lee, Sam Bowie, and Melvin Turpin, among others.