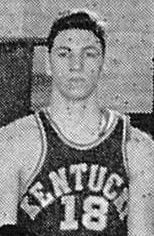 He scored Kentucky’s first bowl-game TD. It wasn’t the best part of his trip – Lexington Herald-Leader (May 17, 2020) by Mark Story

For the first bowl game in Kentucky Wildcats football history, Coach Bear Bryant’s Wildcats did not get a trip to scenic Pasadena nor to balmy Miami.

Cleveland in December was the reward the 1947 Kentucky Wildcats received for going 7-3 in Bryant’s second season as UK head coach. When Kentucky showed up in northeast Ohio to face Villanova in the Great Lakes Bowl, Cleveland’s Municipal Stadium looked like a mushy ice rink.

“The field was covered with ice, and with water,” recalls Jim Howe, a starting halfback on the 1947 Wildcats. “I kept thinking, ‘Oh, boy, it’s going to be so cold landing in that water, getting that ice water coming down (on me).’ I didn’t like the whole idea.”

In UK football history, the name “Jim Howe” will forever hold a unique place. When Howe, a 6-foot, 163-pound product of Fort Thomas, scored a touchdown on a 29-yard scamper in the third period of that chilly Great Lakes Bowl, it was the first TD ever scored in a bowl game by a Kentucky Wildcat.

On Sundays today and in the coming weeks, the Herald-Leader will be running in chronological order the real-time game stories from each of Kentucky’s 10 all-time bowl victories. To introduce that series, we checked in with one of the key players from UK’s first bowl win.

It is always interesting what part of an experience stays with a person. Howe, at the ripe-young age of 93, has no particular recollection of the run that yielded UK’s first-ever bowl TD.

He has a vivid memory, however, of a play he made in the Great Lakes Bowl in punt coverage.

Villanova, Howe says, liked to send two players back to return punts. Once a punt had been received, ‘Nova liked to have the two return men rub off each other — which could set up a handoff between them or a misdirection fake.

“I remember running down there (to cover the punt) and I got to the right guy (with the ball) and I threw him down so there was no gain on the return,” Howe says. “I enjoyed that. That was a lot of fun.”

After quarterbacking Kentucky to its first bowl, Blanda, of course, would go on to have an iconic career in professional football. As a quarterback and place-kicker, the Pennsylvania native played an astounding 26 seasons in the AFL and the NFL.

Howe was a mechanical engineering student on a UK football team that, he says, was filled with physical education majors. At least initially, Howe says he and Blanda had differing postures toward college academics.

Blanda met his future wife, the former Betty Harris, while at UK. “She worked at the bookstore. She was really nice,” Howe recalls. “I think she leveled George, got him to do what he was supposed to do.”

(In 2000, the Blandas, who both graduated from the UK College of Education, established the George and Betty Blanda Professorship in Education at the University of Kentucky.)

As a basketball player at Kentucky, Howe’s claim to fame was scoring a team-high 12 points in UK’s 75-6 blasting of Arkansas State on Jan. 8, 1945.

After a stint in the U.S. Army toward the end of World War II, Howe returned to UK and ended up concentrating on football.

History remembers both Rupp and Bryant as employing dictatorial coaching styles. As one of the select number of athletes who played for both coaching giants, Howe preferred the football coach.

“I liked Bear Bryant. He was tough, but if you did what you were supposed to do, you never got into any kind of problem,” Howe says. “I didn’t like the way (Rupp) did things. He wanted to run everything. He thought he knew everything about everybody.”

Following college, Howe eventually put his UK mechanical engineering degree to use in the industrial-thermal products business. The company he started, Cincinnati-based Big Chief Inc., bills itself as “The Heater Leader.”

As for Kentucky’s visit to the 1947 Great Lakes Bowl, Howe says his life was forever altered for the better on that trip — but not because he scored UK’s first postseason touchdown.

On the way home from the bowl game, Howe got off the train in Cincinnati. On Dec. 20, 1947, he married his fiancee, the former Marge Macke.

“That was the best thing that ever happened to me,” Jim Howe says. “I have the best wife in the world.” 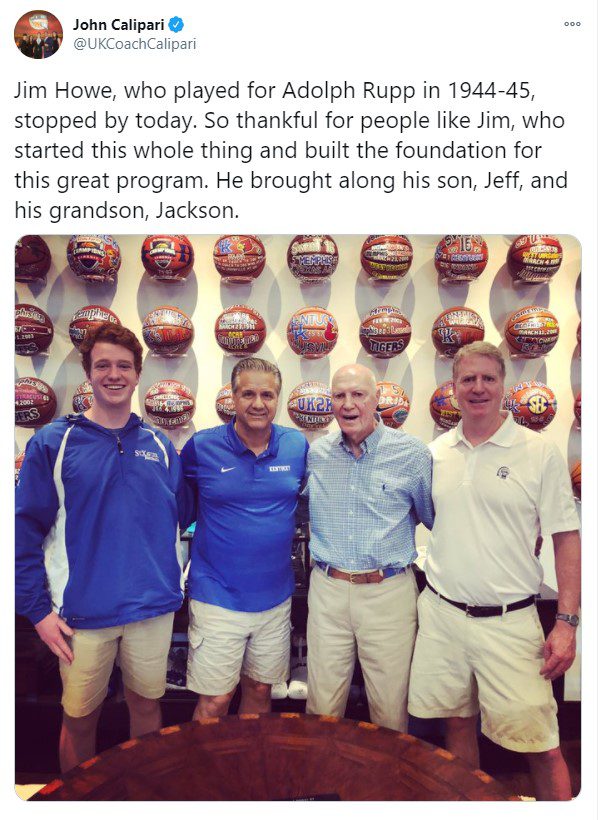