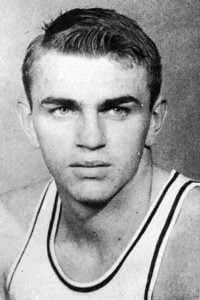 John Lloyd Crigler, a starting forward for the University of Kentucky’s Fiddlin’ Five 1958 basketball championship team and a longtime educator in Scott County public schools, died Saturday at his Georgetown home. He was 76.

“John Crigler was a very good supporter of athletics and a great fellow to be around. He was a friend,” said Joe B. Hall, who coached UK’s men’s basketball from 1972 to 1985.

Hall said Mr. Crigler was active in Georgetown and remained close to the Fiddlin’ Five team that was coached by the legendary Adolph Rupp.

The team’s nickname derived from a musical analogy Rupp used to assess the team’s prospects.

He noted that Kentucky faced a “Carnegie Hall schedule.”

“We’ve got fiddlers, that’s all,” Rupp said of his players. “They’re pretty good fiddlers, be right entertaining at a barn dance. But I’ll tell you, you need a violinist to play in Carnegie Hall. We don’t have any violinists.”

The Fiddlers gave new meaning to their nickname by showing a penchant for playing tense games that went to the buzzer. They lost three times by one point.

The UK starters were Johnny Cox, Ed Beck, Vernon Hatton, Adrian Smith and the 6-foot-3, 180-pound Crigler, a native of Hebron in Boone County. Mr. Crigler had 14 points and 14 rebounds in the game.

Mr. Crigler “loved talking about his days as a player,” said Whitney Bowers Christopher, a daughter. “Some of those guys on the team would get together over the years and have a blast.”

She said Mr. Crigler made it to one exhibition game of this year’s UK basketball team.

“He was so excited about going but later said that would be the only one he could make this year. We knew then that he was getting worse.”

Mr. Crigler was a teacher, coach and athletic director at Scott County High School for more than 40 years.

The basketball floor at the old county high school, which now is a middle school, was named in honor of Mr. Crigler, Haley noted.

“He still volunteered a lot for the schools. He will be sorely missed.”

At Scott County High School, Mr. Crigler “taught typing and economics, though he couldn’t type very well,” his daughter said with a laugh.

“He was the greatest dad and teacher. Every student knew him. Everyone loved him like a dad. He married my mom when I was 8. I couldn’t be more blessed. Our whole family feels that way.”

The family also said Mr. Crigler leaves a caregiver, William Mason, who was like a son to him.

Visitation will be from 3 p.m. to 8 p.m. Monday at Harmony Christian Church in Georgetown.

The funeral will be at 11 a.m. Tuesday at the church. Burial will be private in the Georgetown Cemetery. Johnson’s Funeral Home of Georgetown is in charge of arrangements.