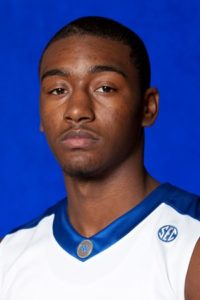 Johnathan Hildred Wall Jr. was born September 6, 1990, to Frances Pulley and John Carroll Wall Sr.   A Raleigh, North Carolina native, Wall was chosen with the first overall pick of the 2010 NBA draft by the Washington Wizards after playing one year of college basketball for Kentucky. Wall, who plays the point guard position, was a five-time NBA All-Star from 2014 to 2018 and was named to the All-NBA Team in 2017. However, he experienced multiple injuries in 2019 and missed more than two years of basketball before being traded to the Houston Rockets in December 2020.

Wall played his first two years of high school basketball at Garner Magnet High School in Garner, North Carolina. After his second season, his family moved to Raleigh, where he repeated his sophomore year at Needham B. Broughton High School. Despite having a very impressive tryout, Wall was cut from the school’s varsity team. For this reason, he transferred to Word of God Christian Academy, also in Raleigh.

On the heels of his second sophomore year of high school, in the summer of 2007, Wall was invited to the prestigious Reebok All-American Camp in Philadelphia; there, he distinguished himself by scoring 28 points against a team that featured future lottery pick Brandon Jennings.

In 2008, Wall played in the Elite 24 Hoops Classic, at which he scored 10 points and won co-MVP honors alongside Dominic Cheek, Maalik Wayns, and Lance Stephenson.

As a fifth-year senior in 2009, Wall averaged 19.7 points, 9 assists, and over 8 rebounds for Word of God Christian Academy and was ranked one of the best high school basketball players in the class of that year.  He led the Holy Rams basketball team all the way to the North Carolina Class 1A state championship; they were ultimately defeated by United Faith Christian Academy 56–53, but not before that school’s Ian Miller hit a 40-foot game-clinching jump shot at the buzzer. Wall scored 11 points in the contest.  He was selected to participate in the 2009 Nike Hoop Summit in Portland, Oregon; he scored 13 points to go along with 11 assists and 5 steals at the high-profile event.  He was also selected to play in the Jordan Brand Classic that year at Madison Square Garden, where he notched 6 assists.

Originally recruited by Kentucky, Memphis, Miami, N.C. State, Baylor, Duke, Georgia Tech, and Kansas, Wall announced his commitment to attend Kentucky on May 19, 2009.  He was suspended by the NCAA from Kentucky’s first exhibition game and first regular season game for travel benefits he received from his AAU coach Brian Clifton, a certified agent at the time.  In his first action as a Wildcat, in an exhibition game against Clarion University of Pennsylvania, the freshman point guard led his team to victory with 27 points and 9 assists in 28 minutes of playing time.  In his collegiate debut at Kentucky versus Miami University, Wall made the game-winning shot with .5 seconds left on the clock to help then #5 ranked Kentucky win. He finished with 19 points, 2 rebounds, 5 assists, and 3 steals.

On December 29, 2009, against Hartford, Wall set the Kentucky single-game assist record with 16, 11 in the first half, with only 1 turnover. The mark was previously held by Travis Ford, at 15, and was broken on Ford’s 40th birthday. TyTy Washington broke that record with 17 against Georgia on January 8, 2021.

In only one season, John Wall made a huge impact.  John Wall revolutionized Kentucky basketball, bringing it back from the doldrums of the Billy Clyde days and catapulting the program back to national prominence to kick off the John Calipari era.  John Wall was the reason for Wildcat fans to be enthusiastic once again about Kentucky basketball.  He had a lasting first impression when he came out for Midnight Madness with a unique dance, later called the “John Wall Dance.”  People all over were spotted mimicking the move.

The tradition of winning was reinstated in a new era, all headed by a freshman. His smile, speed, and instant connection with fans made him the face of the program, and he lived up to all the hype surrounding him.  Flanked by DeMarcus Cousins and Patrick Patterson, he led the team to a thrilling SEC title.  At Kentucky, Wall averaged 16.6 points and 6.5 assists per game as he led the Wildcats to the Elite Eight in the 2009-10 NCAA season. He also won the Adolph Rupp Trophy, the SEC player of the year, and was a first team All-American.

On April 7, 2010, Wall announced that he would forgo his final three seasons of collegiate eligibility and enter the 2010 NBA draft, where he was expected to be the first overall selection for the Washington Wizards.

On June 24, 2010, Wall was drafted as the first overall pick by the Wizards. On June 25, 2010, Mayor Adrian Fenty of Washington, D.C., declared June 25 John Wall Day on a plaque handed to Wall during his Wizards presser.

In 2016, Wall received the Stewart B. McKinney Award for his work to end homelessness after he donated $400,000 to Bright Beginnings.

On September 22, 2017, Wall was inducted into the University of Kentucky Athletics Hall of Fame.