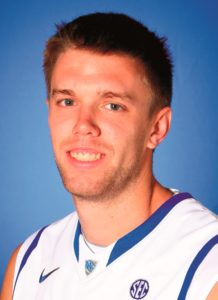 Senior: Named to the SEC Community Service team for excellence shown in the community … Appeared in 13 games making one start … Poured in 15 points including a trio of 3-pointers … Finished his career by making nine consecutive shots from the charity stripe … Nailed a 3 in six minutes of action in a winning effort vs. Alabama on Senior Night … Knocked down a 3 in a season-high 13 minutes at Mississippi State … Nailed a jump-shot from the corner and added an assist in action vs. Georgia … Had an assist in the win over Mississippi State … Drained a pair of free throws after swiping a steal vs. UT Arlington … Nailed a 3-pointer and two free throws to score five points in UK’s win over Northern Kentucky … Logged a steal and an assist in six minutes of action vs. UNC Asheville … Had four points and a blocked shot in 11 minutes of a win over Montevallo … Logged two points and an assist in the victory over Transylvania.

Junior: Suffered a torn ACL in summer workouts and sat out the season.

Sophomore: Played in 33 of 38 games, averaging 0.8 points and 0.7 rebounds … Grabbed a rebound and a steal vs. Ole Miss in the SEC?Tournament … Hit his only shot attempt at Florida, a jumper as time expired in the first half, which brought UK within two … Had a career-day against LSU by playing a career-high 20 minutes, pulling down a career-high four rebounds, dishing out a career-high three assists, and scoring two points to go with one steal … Had two rebounds in six minutes of action against Auburn … Had one rebound in four minutes against Georgia … Was a perfect 1-for-1 from the field against Penn with two points and one rebound … Totaled career-highs with seven points and one block in 14 minutes vs. Coppin State … Logged nine minutes against Winthrop … Played two minutes against both MVSU and Indiana … Played four minutes against Notre Dame and connected on his only 3-point field goal attempt … Played two minutes on the road against North Carolina … Scored two points against Boston in nine minutes of action … His two points against Boston came from a dunk, the first of his career … Logged 10 minutes vs. UConn at the EA Sports Maui Invitational, making his first 3-pointer of the season … Grabbed two key late rebounds in only three minutes vs. Oklahoma … Pulled down three rebounds against Portland to tie a career high … Played a career-high 12 minutes and attempted a career-high four free throws … Scored two points and pulled down one rebound in six minutes of action against East Tennessee State … Scored 18 points on 7-of-9 shooting from the floor and 4-of-6 shooting beyond the arc in the exhibition against Dillard.

Freshman: Played in 17 games, averaging 1.2 points … Totaled two points and a season-high three rebounds in UK’s Second Round win over Wake Forest in New Orleans … Grabbed two rebounds and made 2-of-2 free throws vs. ETSU at the NCAA Tournament … Made 2-of-2 free throws and grabbed one rebound vs. Tennessee at the SEC Tournament … Scored three points in three minutes at LSU … Earned his first minutes in SEC play, nailing a three-pointer vs. Arkansas … Totaled a season-high five points and two rebounds in the win over Drexel … Nailed his first three-pointer and had two assists vs. Cleveland State in Cancun … Earned a career-high 10 minutes in the win vs. Rider … Totaled one rebound and one assist in eight minutes vs. Sam Houston State … Scored seven points with four rebounds in UK’s second exhibition win over Clarion.

Born on May 9, 1991 … Son of Brian and Kelly Hood … Chose Kentucky over Ole Miss, Tennessee and Georgia.