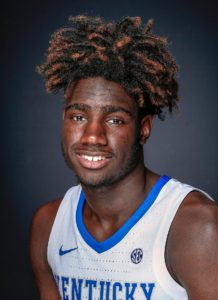 Freshman: Departed the program on Jan. 24 to pursue other options … Appeared in 18 games with eight starts in his abbreviated season with the Wildcats … Averaged 3.3 points and 1.7 rebounds … Scored seven points in 16 minutes vs. Utah … Went 3 for 4 from the floor and posted seven points in 18 minutes vs. Fairleigh Dickinson, his first appearance off the bench … Stared the first seven games of the season … Scored nine points with two steals and a 3-pointer vs. Mount St. Mary’s … Grabbed a career-high five rebounds in a season-high 25 minutes in the home victory over Utah Valley … Scored a career-high 11 points on 5-of-8 shooting in the win vs. Eastern Kentucky.

Tabbed the No. 11 overall player by the Recruiting Services Consensus Index in the 2019 class … Consensus five-star prospect … Ranked in the top 15 by every major recruiting service, including 247Sports (No. 11), ESPN (No. 12) and Rivals (No. 14) … 247Sports tabs him as the second-best small forward in the class … Named Naismith High School Boys’ All-America Third Team … Secured All-USA Today New Jersey First Team honors … Averaged 19.4 points and 5.7 rebounds per game for Roselle Catholic … Second alum from Roselle Catholic to play under John Calipari at Kentucky, joining Isaiah Briscoe … Scored in double figures in all 29 games during his senior season with 11 games of 20 or more points … Led Roselle Catholic to the New Jersey’s Tournament of Championship as a junior … Averaged 21.1 points and 7.2 rebounds on the Nike Elite Youth Basketball League circuit … Scored more than 2,000 points during his high school career … Participated in the McDonald’s All-American Game, the Jordan Brand Classic Game and the Iverson Roundball Classic … Named co-MVP at the Iverson Classic after scoring 38 points in the contest.

Born Jan. 8 in Chicago … Major is undeclared/exploratory studies in agriculture … His parents are Kelly Whitney and Chanel Tillmon … Has three siblings, Kylie, Tyreese and Isaiah … Father played basketball at Seton Hall … Also played football as a kid … Nickname is the Dragon … Can play the drums … His most prized possession is his family … Father has been his life’s greatest influence … Most memorable moment as a basketball player is winning a state championship … Definition of a true hero is someone who changes the lives of others … Chose Kentucky over Oregon, Illinois, Georgetown and Miami.