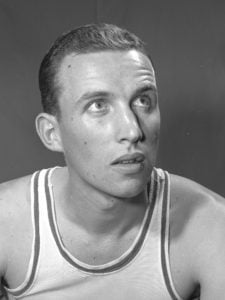 Kenneth Herman Rollins was born September 14, 1923, in Charleston, Missouri to William Egbert Rollins and Olga Corinne Malone Rollins.  He grew up in Wickliffe in far Western Kentucky and graduated from Wickliffe High School in 1941.

He attended the University of Kentucky from 1941 until 1943 where he started on the ’42 varsity basketball team and played on the baseball team. He left UK in 1943 to serve in the U.S. Navy. While in the Navy, Kenny played basketball under coach Tony Hinkle and was stationed at Great Lakes, Memphis, San Diego and Hollister. He returned to UK in 1946 and was named most valuable player in 1946-47 and captain as a junior and senior.  He was the captain of the Fabulous Five team of 1947-48.

The smooth ball-handling guard from Wickliffe was most valuable not for scoring, but for his cool leadership of the Kentucky team on the floor.  In the clutches, Rollins makes the important decisions.  He had a smart change of pace, weaving down the floor to set up most scoring plays.

Kenny was part of the 1948 Olympic Team, which won the Gold in London, this also was his proudest moment in life. Returning to the United States, he was drafted as a point guard by the BAA Ft. Wayne Pistons, traded to the Chicago Stags and was named 1948 – 49 Rookie of the Year. After two seasons in Chicago, he went on to coach and play with the Louisville Aluminites, until being picked up by the NBA Boston Celtics, where he played for 1 ½ years. He was also pursued by the St. Louis Cardinals and Cincinnati Reds baseball farm teams.

Joe B. Hall, a freshman when the Fabulous Five won the 1948 national championship, recalled Kenny Rollins as a mentor: “Just a super guy,” Hall said. “He kind of helped me, gave me some encouragement as a young player. He told me about how to do certain things and accept certain things. …I never knew anybody who didn’t like Kenny.”

Wallace “Wah Wah” Jones, the last surviving member of the Fabulous Five, remembered Rollins as an unsung contributor to a storied Kentucky team: “I don’t think he ever got real credit for his ability,” Jones said. “He was a great defensive man. He was outstanding all the way around.”

On the court, Rollins’ most notable moment might have been when he was the primary defender against Bob Cousy in Kentucky’s 60-52 victory over Holy Cross in the 1948 national semifinals.

Off the court, Rollins liked to sing. Jones recalled Rollins singing two songs when athletes staged a talent show on the ship that took them to the 1948 Summer Olympics in London.  Rollins sang My Old Kentucky Home at UK’s Senior Day in 1996. “He said that was the most nervous he ever was in his life,” Kevin Rollins said.

After a brief stint in the NBA, Rollins began working in sales in the packaging industry, Kenny lived in Louisville, Grand Rapids, MI, Lexington, Evansville, and Lawrenceburg, Kentucky where he retired in 1986 from the Smurfit Corporation. He and his wife, Mabel, retired to Bradenton, Florida in 1994.

Of his father’s glory days as a UK basketball player, Kevin Rollins said, “He’d talk to me when I prompted him. If other people were around, he’d clam up. He was a private man.”

The younger Rollins recalled his father talking about growing up in Western Kentucky and having to awaken at 4 in the morning to chop wood for a stove.

That early-morning chore ended when the family bought a kerosene stove. “The highlight of his teenage years,” the younger Rollins said of his father.

His uniform number 26 has been retired by the University of Kentucky.