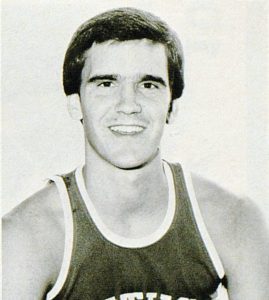 Helped Kentucky to the 1978 national championship, UK’s fifth and first in 20 seasons … 1980 SEC Player of the Year … Three-time All-American with NCAA Consensus All-America First Team honors in 1980 … Also named to the UPI All-America Third Team in 1978 and the NABC All-American Third Team in 1979 … Three-time All-SEC First Team member … Tabbed the NCAA Regional Most Outstanding Player en route to the 1978 national title … 1979 SEC Tournament MVP … Won two SEC championships … Scored 1,411 career points, finishing his career ranked No. 12 on the all-time list … Averaged double figures in all three seasons, including 15 or more in his final two seasons … Totaled 470 assists in his UK career, which, at the completion of his career, was the most in school history … Top career free-throw percentage in school history (minimum 200 attempts) at .890 … Top single-season free-throw percentage in school history (minimum 50 attempts) at .912 …  Drafted 22nd overall by the Phoenix Suns in the 1979 NBA Draft … Played seven seasons in the NBA, averaging double-figure scoring in three of them. 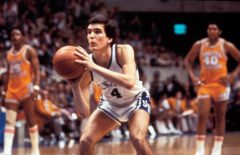 Macy, born in Fort Wayne, Indiana and raised in Peru, Indiana, played college basketball first at Purdue University and then transferred to UK, and spent seven years in the NBA with the Phoenix Suns, Chicago Bulls and Indiana Pacers; he then spent three seasons in the Italian Lega Serie A. After his playing career, he has held various basketball-related positions, including coach, general manager, and broadcaster.

The 1975 Indiana “Mr. Basketball” Award winner from Peru High School, where he played for his father, Bob; chose to attend Purdue University, coached by head coach, Fred Schaus. Macy averaged 13.8 points a game as a freshman, while leading the Boilermakers in free throws, shooting .859 percent from the line on the season. He started in 25 of 27 games, helping them to a 16–11 season record. 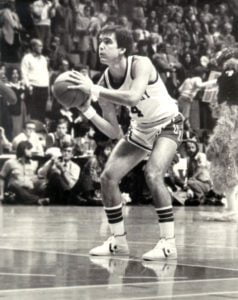 After playing his freshman year at Purdue, Macy transferred to the University of Kentucky in 1976. After sitting out the 1976–77 season as mandated by NCAA rules, he started playing at Kentucky in 1977. Macy had a very successful college career, as a three-time All-America and three-time All-SEC player. The 1978 team on which Macy was a starter won the 1978 NCAA National Championship. In his senior year of 1979–80, he became the first Kentucky player ever to be named consensus Southeastern Conference Player of the Year.

Macy was selected with the 22nd pick of the 1979 NBA Draft by the Phoenix Suns, even though he had a year of college eligibility remaining. Macy played out his last year of college, and started playing for the Suns in 1980. Macy spent five years with the Suns, averaging 10.6 points and 4.0 assists per game. Macy spent one year each with the Chicago Bulls (1985–86) and the Indiana Pacers (1986–87) before retiring from the NBA. Then he played professionally in Italy for Dietor Bologna (1987–88) and Benetton Treviso (1988–90). Macy was also one of the original participants of the NBA All-Star Three Point Contest when it debuted in 1986.

Macy was an excellent free throw shooter throughout his career. During the 1981-82 NBA season he led the NBA in free throw percentage. He still holds the career free throw shooting percentage record at the University of Kentucky, and his .884 career percentage is second only to Steve Nash (.907) on the Phoenix Suns’ career leaders list.

Macy was head coach of the Morehead State University Eagles of the Ohio Valley Conference for nine years. In 2003, Macy coached the Eagles to 20 wins, its most in 19 years, and a share of the OVC regular season championship. However, the 2004–05 season was less successful, as Morehead failed to qualify for the OVC tournament. Following that season, Macy coached a group of Sports Reach collegiate all-stars that toured China and finished with a perfect 7–0 record against several Chinese professional teams. After a disastrous 4–23 season in 2005–06, Macy resigned as head coach on February 28, 2006.

Later in 2006, Macy accepted the head coaching position on the Lexington Christian Academy Eagles Men’s tennis team. In his first season they had their first winning season since 2003. In November 2007, Macy was named general manager of the East Kentucky Miners, an expansion team of the Continental Basketball Association, based in Pikeville, Kentucky. Later, he served as the color commentator for University of Kentucky telecasts. In October 2016, Macy joined the staff of head coach Brian Lane at Transylvania University.