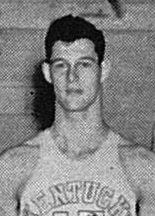 Larry Spears was born Lawrence Eugene Spears on October 1, 1917, in Boyd, Kentucky to William Roscoe and Emma Lilly Spears.  He had a sister, Eva Burks, and a brother, Arthur Spears.

Spears was an outstanding West Virginia High School athlete, having been named All-State in football and basketball at Ceredo-Kenova High School.

Spears lettered in basketball, football, and track (discus and shotput) at the University of Kentucky and was an intra-mural heavyweight- wrestling champion. A member of the student council at UK, he also helped found the “K” Club for athletes before graduating.  He was a member of the Sigma Alpha Epsilon social fraternity and the student council.  He was nicknamed “Lil’ Abner” while at UK because of his
striking physical resemblance to Al Capp’s gangling Dogpatch rustic.

He served as an ROTC instructor for the University of Kentucky and for Davis & Elkins College.

As a pilot in the 60th Troop Carrier Group, Spears took part in the longest combat flight ever attempted to drop paratroopers over enemy territories in World War II. The successful mission to North Africa established the record which is still held by the 60th Troop Carrier Group and which is memorialized by monument at the Wright-Patterson Air Force Museum. He also participated in the invasion of Sicily and Italy.

After flying his combat missions in the Korean Conflict, he was appointed Director of Troop Movement Control, and later in the Far East Air Force headquarters, Tokyo, Spears conducted daily briefings for General Weyland, Commanding General of FEAF, and General Mark Clark, Commanding General of the Far East. For his outstanding contribution during the Conflict, he received the Bronze Star. He was also the recipient of the Air Medal and many clusters for his service activities. Spears’ last assignment was as Commander of all tactical air refueling in England, Western Europe, the Mediterranean and North Africa.

A former Deputy Commissioner of Commerce for West Virginia, Spears was chosen by then Governor Hulett Smith to open the first Appalachian Regional Commission office in West Virginia.

Spears was married to former State Senator Jae Spears, an 18-year member of the West Virginia Legislature.  They were wed on May 30, 1942, at the Chapel at Westover Field, Massachusetts.

He directed the 30th Mountain State Forest Festival, one of the largest festivals in the Eastern United States.

Following service in state government, Spears became the executive director for the Upper Potomac Development Corporation, which coordinated the economic development projects for the eight counties of the Eastern Panhandle. When the state Regional Planning and Development Councils were put into play, Spears was hired by Region 8 as Executive Director. Under his guidance, the Eastern Panhandle was one of the first areas to develop sanitary landfills to replace open dumps and to establish industrial parks. During that period, the area also saw many water and sewage projects completed. Following his retirement as Region 8 Director in 1981, he became a consultant for economic development projects.

Spears was a former member of the Lexington, Kentucky Jaycees and a former member of Elkins Rotary. He served as state president of the West Virginia Planners Association and served on the board of directors for the Mountain State Forest Festival since 1968. He also served as representative to the Region 8 Area Aging Agency Council.

Col. Lawrence Eugene Spears of Elkins, a retired U.S. Air Force career officer who served the state and region as an economic planner and developer for several years, died March 14, 1996.