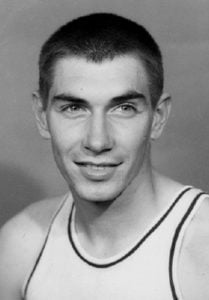 Abraham Lincoln Collinsworth was born in Salyersville, Kentucky, February 12, 1936, on Abraham Lincoln’s birthday. He passed away October 13, 2012, at the age of 76, in Orlando, Florida. Abe was the son of Judge Green and Kitty Collinsworth.

Abe was known as “Lincoln” in High School, where he played basketball and was one of the highest scorers in Kentucky High School history.

Abe attended the University of Kentucky in Lexington and played basketball for Coach Adolph Rupp. Coach Rupp started calling him “Abe” which stuck. Abe, as part of the Kentucky Wildcats “Fiddling Five”, helped win a National Championship in 1958.

While at the University of Kentucky, Abe met his bride, Donetta Browning. Abe and Donetta had two sons, Greg who is deceased, and Cris. Abe and Donetta were both educators and while Donetta opted to stay home when their boys were in their early teens, Abe dedicated his life to education. He taught briefly in Ohio and moved to Brevard County, Florida in 1963. He moved up the ladder from teacher and coach to counselor, vice-principal, principal, Assistant Superintendent for Personnel and Superintendent of Brevard County Schools. He became Principal of Astronaut High School in Titusville, Florida in 1972. He opened the new school and also was the principal for his two sons. In 1977, Abe became Assistant Superintendent for Personnel and in 1988, he was appointed the Superintendent of Brevard County School System. Abe retired in 1994.

Abe and Donetta moved to Orlando for their retirement. Abe enjoyed people; he loved telling stories, especially when he was the “punch line”. He treasured his family and friends; a life well-lived, Abraham Lincoln Collinsworth.

Abe was preceded in death by his son, Greg; and is survived by his wife, Donetta; son, Cris, and daughter-in-law, Holly Collinsworth, and their four children, Katie, Austin, Ashley and Jac; and brothers, Tim and Ham Collinsworth; and sister, Wandaleen Bailey.

The service will be held at the Woodlawn Funeral Home, 400 Woodlawn Cemetery Road, Gotha, FL, on Thursday, October 18th, at 2 pm.