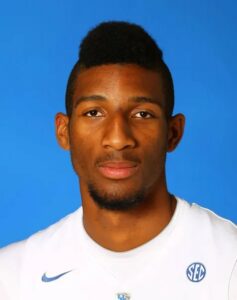 Marcus Andrew Lee was born September 14, 1994, in San Francisco, California to Sherri and Ronnie Lee.  As a senior at Deer Valley High School, he notched 17.7 points, 19.5 rebounds and 6.7 blocks per game and earned Bay Area Player of the Year accolades.  Lee was also an exceptional volleyball player who helped lead his team to a sectional title as a senior.  As a junior in high school, he averaged 13.9 points, 13.1 rebounds, 9.1 blocks and 1.3 steals.  In his very first AAU competition, he registered a triple-double that was highlighted by 11 blocked shots.  Ranked as the No. 17 overall player and the No. 5 power forward in his class by Rivals.  He joined five other UK classmates at the Jordan Brand and McDonald’s High School All-America games.

Marcus Lee didn’t follow the same recruiting road to Kentucky as some of his future teammates.  Lee wasn’t always a highly touted prospect. He didn’t join one of the country’s top AAU programs at a young age. Until September of 2012, he didn’t even have a scholarship offer from UK.  But on Otober 17, 2012, Lee sat at a table in his high school gym in Antioch, Calif., and said he would be a Wildcat.  He chose Kentucky over Cal, Louisville and Duke.

As a freshman at Kentucky, he claimed SEC Academic honors.  He saw action in 25 games and made four starts.  Marcus averaged 2.4 points and 1.4 rebounds per game.  He made his first career start against Robert Morris.  Lee delivered his best performance of the season to help UK advance past Michigan in the Elite Eight, scoring 10 points, grabbing eight boards, including seven offensive, and swatting two shots in 15 minutes of action.  He then earned Midwest Region NCAA All-Tournament team accolades after pouring in 10 points and hauling in eight rebounds in a Sweet 16 win over Michigan.

On April 18, 2014, Lee announced he would return to the University of Kentucky for his sophomore year to join a front court including Cauley-Stein, Johnson, Alex Poythress, Karl-Anthony Towns, Trey Lyles, and Derek Willis.  As a sophomore, Marcus was named to the SEC Community Service Team for his accomplishments away from the basketball court and was a second-time member of the SEC Academic Honor Roll.  Lee saw action in all 39 games for the Wildcats.  He posted career highs in points per game, rebounds per game, minutes per game and field-goal percentage in 2014-15.  He averaged 2.6 points, 2.7 rebounds but blocked 27 shots; shot a team-best 64.4 percent from the field.

Lee enjoyed the best season of his Kentucky career during his junior campaign when he boasted career highs in points per game (6.4), rebounds per game (6.0), total  blocks (59) and total assists (11). He shot a team-best 68 percent from the floor, the best single-season field-goal percentage in school history with a minimum of 150 attempts. His 216 total rebounds were the most on the team, and he led the team in blocked shots in a team-high 18 games.

Lee surprised Kentucky fans in late May of 2016 by announcing he would transfer after withdrawing from the NBA Draft following a disappointing showing at the NBA Combine. In a school-issued statement, UK head coach John Calipari said Lee wanted to transfer to a school to be closer to his family in California and to take a year to “regroup.”  Lee said at the time, “I want to thank the University of Kentucky, the basketball staff and the Big Blue Nation for supporting me over the years.  I’m sorry it took me so long to come to this decision, but I’m trying to do what’s right for me and my family. I’ll always think fondly of my time at Kentucky.”

He sat out the 2016-17 season before joining the University of California Golden Bears.  In his redshirt senior season at California, Lee started all 32 games and averaged 11.4 points, 7.2 rebounds, 1.6 blocks, and 1.3 assists per game. He had the eight-highest single-season blocks in school history with 52.