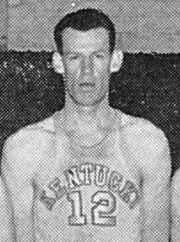 CLUGGISH, ROBERT M. Born September 18, 1917 in Kentucky, came to Orlando with his wife Patricia, to share his knowledge of sports with the young men at Howard Middle School, after playing professional basketball with the first teams of the New York Knickerbockers. He was one of the first “big men”, being 6’10”, in the 1940’s NBA. He also played football and basketball at the University of Kentucky where he was actively recruited by Coach Adolph Rupp.

After decades of teaching, coaching and winning at Howard, he retired and the gymnasium at the school was named in his honor. On September 5th of this year, he succumbed to a sudden cardiac event and went to be reunited with his parents, brother Stan and wife Pat. He is survived by his elder sister, Sarah Martin, niece Dr. Julie Martin and ex-wife and caregiver, Iris.