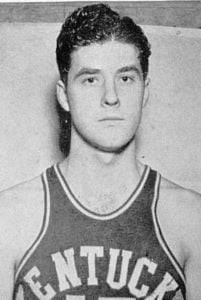 From “Brewer was a ‘small town here” published in the News and Tribune on April 13, 2020

There are several roads that connect New Albany High School with Fairview Cemetery at 800 E. 6th Street. All told it’s less than a mile if you walk it.

Charles Melvin Brewer — a New Albany Bulldog, University of Kentucky Wildcat and part of the Greatest Generation as a second lieutenant in the U.S. Army during World War II — traveled the long way in his 25 years.

Born on June 28, 1919, Mel Brewer excelled at track, but at 6-foot-5 he made a big impact on the basketball court for the Bulldogs, leading New Albany to sectional championships in 1936-37 and ‘37-38 — during a five-year title run. Playing for Charlie McConnell, Brewer was known as a fine offensive center and, according to a story in the New Albany Tribune, “was adept at pivot pokes from the front and was a past master at tipping in rim-spinners.”

A starter as a junior, Brewer was named team captain in 1937-38. Perhaps his biggest moment as a high school player — besides the sectional titles — came in January of 1938 when the Bulldogs played archrival Jeffersonville in the Red Devils’ new Jeffersonville Fieldhouse. It was Brewer who led the way in rebounds as the Bulldogs notched a hard-fought 21-19 win.

All of this caught the attention of legendary UK basketball coach Adolph Rupp, who was still in the process of building the Wildcats into a national power.

When Brewer graduated from New Albany in 1938, he became a member of the local Indiana National Guard and took his hoop talents to Lexington, Kentucky.

At UK, Brewer began playing for the Wildcats’ varsity in the 1940-41 season. Over time he became nationally-renowned as one of the best centers in college basketball. He averaged 4.7 points per game his first season, 7.1 in his second and 8.3 as a senior.

His career highlights included leading UK to its first Final Four appearance in 1942 and making the Southeastern Conference All-Tournament team in 1943. His career high was 20 points against Georgia Tech on January 20, 1942.

Brewer joined the military in 1942 and finished his college work while in the Army. He left Kentucky in 1943 and received his officer’s training at Ft. Benning, Ga.

In May of 1944, he was sent to Camp McCain in Mississippi before being shipped to Fort Meade in Maryland the following month.

In his obituary, the Tribune reported that news of his death was sent by telegram from the war department and received by his wife, Jacqueline Bir Brewer at 1301 E. Main, where she had been residing with her parents, James and Ella Bir during her husband’s absence.

His family lives on and Brewer’s story — and journey — did not end in Viers.

In August of 1948, four years after his death, Brewer’s body was returned home and buried at Fairview Cemetery.

“I remember being at the cemetery and everybody crying,” she said. “All my childhood I heard all these positive things; it was a very positive memory. People were very grateful. They would say things like ‘I knew your father, he was a wonderful guy.’”

However, the kid from New Albany was much more than that. He was a husband, a father and a soldier who made the ultimate sacrifice.

“He was a small town hero, admired a lot,” Blemker said.

Along with Blemker, Brewer’s son Melvin currently lives in Greenfield. Meanwhile their mother, Brewer’s widow, Jacqueline, is 98 and lives in Evansville.

Second Lieutenant Melvin C. Brewer, army infantry, was reported killed in action in France, August 6, according to a telegram received Saturday from the war department by his wife, Mrs. Jacqueline Bir Brewer, 1301 E. Main, who has been residing with her parents, Mr. and Mrs. James L. Bir during her husband’s absence.

Lieut. Brewer was the son of Mr. and Mrs. Calvin J. Brewer, 1003 Silver. An one-year-old daughter, Vicki Lynn, and a brother, Captain Kenneth Brewer, with the army in New Guinea, also survive.

Lieut. Brewer was widely known in athletic circles as a basketball and track star. He played on the New Albany high school 1936-37, and 1937-38 teams and was regarded as one of the greatest offensive centers to represent the Bulldogs.

Graduating from New Albany high school in 1938, he enrolled a year later at the University of Kentucky, where he became nationally known as one of the greatest hoop centers in collegiate circles. He left U of K in 1943 to join the armed forces. He received officers training at Fort Benning, Ga.

He had been a member of the local Indiana national guard unit before entering college, where he also received military training.

The body of 2nd Lieut. Melvin Charles Brewer, a New Albany man killed in the service of his country, recently arrived in the United States.

Born June 28, 1919, Lieut. Brewer was a graduate of New Albany High School where he was an outstanding basketball player. He captained the Bulldogs during the 1937-38 season after gaining the regular center berth the year before. His coach was Charlie McConnell, present head mentor of the Logansport Berries.

Brewer, who stood five inches above the six foot mark, was adept at pivot pokes from the front and was a past master at tipping in rim-spinners.

New Albany high school’s basketball team was led to victory by Brewer in the first appearance of the Bulldogs at the new Jeffersonville Fieldhouse in January of 1938. After a hectic game with their sports arch-enemies, the Jeff Red Devils, the Bulldogs, with Brewer commanding most of the rebounds, won by 21-19.

Brewer, also a capable NAHS track star, entered the University of Kentucky in September, 1940 and a year later became the Wildcats regular pivotman. He performed at New York’s Madison Square Garden and was acclaimed as a great center by many of the nation’s leading sports scribes.

Lieut. Brewer entered the service September 30, 1942 and completed his college work while in the Army. He was graduated from the University June 4, 1943.

He later went to Ft. Thomas and Ft. Benning where he commissioned 2nd Lieut. upon graduation from Officers Candidate school in December, 1943.

While attending the University of Kentucky he was a star basketball player from 1941 through the spring of 1943. Brewer entered the Army on May 10, 1943, following his graduation from the University where he had taken advanced military training. He received his commission at Ft. Benning, Ga., and was sent overseas for combat. Lt. Brewer lost his life while fighting in France on August 6, 1944. Besides his wife and parents, his two children, Vicki Lynn and Melvin Charles, survive.