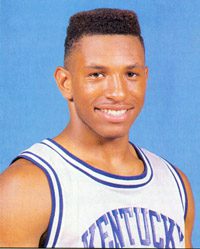 Nehemiah Braddy was born October 4, 1971, in Jacksonville, Florida to Nehemiah and Catherine Braddy.  He was called Junior.

In high school, Braddy averaged 23.6 points, 8.6 rebounds and 2.7 assists his senior year for Middleburg High School in Florida.  He earned All-City, All-County, and All-District honors.  He was a three-year starter and team captain.  Braddy also played baseball all four years of high school.  He scored a career-high 41  points against Palatka High School.

Braddy joined Kentucky as a walk-on and played for Rick Pitino from 1989-93.  He rose from walk-on during the 1989-90 season, when UK had only eight scholarship players because of probation, to a team leader for 1992-93.  Coach Pitino wanted to cut him from the team after he was late for his first day of practice, but assistants Herb Sendek and Billy Donovan talked him out of it.  Braddy earned a scholarship during the 1991-92 season.  He was also an excellent baseball player and played outfield on UK’s baseball squad.  Braddy had been known to play barber in the Wildcat Lodge, cutting the hair of several of his teammates.

Braddy turned down a scholarship at the University of Tampa and from several junior colleges in deciding to walk on at UK.  As a walk-on freshman at Kentucky, Braddy played in 20 of 28 games, the most of the walk-ons.  He was the third-leading scorer in UK’s five preseason Blue-White scrimmages, averaging 28.6 points and 6.6 rebounds per game.  On November 20, 1989, he scored 37 points in Kentucky’s final pre-season scrimmage.  Against Mississippi State on December 4, 1989, Braddy scored 7 points in just 7 minutes of action.  On December 19, 1989, he hit a three-pointer against Furman that allowed UK to tie the NCAA record for three-pointers made in a game.  “Someone was yelling we were going for the record,” Braddy said. With 14 seconds to play, Braddy went up in heavy traffic more than 22 feet from the basket — in NBA three-point range — and let fly with a high, arching shot that found the net with a whooosh.  It wasn’t an artistic thing, but Braddy knew it was going in.  “Every shot I take I think is going in,” Braddy said, laughing.

As a sophomore at Kentucky, Braddy saw action in 23 games and averaged 3.3 points per game.  UK coach Rick Pitino said he told little-used sophomore Braddy to be ready to play against the Cardinals. On December 29, 1990, Braddy responded and provided a spark off the bench with a season-high five points in 11-plus minutes.  “I told him he was going to play because he’s been playing extremely well in practice,” Pitino said.  Braddy also had two assists and a steal.  On January 5, 1991, he was one of the keys to Kentucky’s win over LSU.  He had two timely three-pointers and finished with eight points, three rebounds, two steals and two assists.  Pitino said following the LSU game: “I call him World B. Braddy. Junior never saw a shot he didn’t like.”  He had a then career-high 13 points against Georgia in Lexington on February 3, 1991, on 5-5 field goal performance (2-2 from three-point range).  He also had two steals and a blocked shot while playing a career-high 19:35.  Said Braddy, “I will never forget my game against Georgia.  I didn’t miss anything.  Sometimes, I can still hear the sounds of that crowd cheering for me.”

As a junior, Braddy was awarded with a scholarship and played in 35 games averaging 2.7 points per game.  He was hampered late in the season by a broken nose, suffered in UK’s home game against South Carolina on February 26, 1992.  Braddy stepped forward and made the difference in the Wildcats’ 78-66 victory over Georgia on January 7, 1992, at Rupp Arena.  He was everywhere hitting the outside jumper, scoring on drives to the basket, rebounding at the offensive end, and, perhaps most important, putting the squeeze on the Bulldogs’ All-SEC guard, Litterial Green.  Pitino, who conceded that Braddy was in the UK doghouse a couple of weeks ago, was quick to laud Braddy’s major contributions in the Wildcats’ second straight league victory.  “That was a great defensive job,” Pitino said of Braddy’s work on Green. “He (Braddy) was big on the glass and big at the defensive end. For a while, he slipped to about the last man on the team because he stopped working in practice. He started working hard again and he got it (playing time) back.”  In 21 minutes, Braddy nailed five of nine shots — including a pair of 3-pointers — for a career-best 15 points. All five of his rebounds were at the offensive end.  Moreover, he helped limit Green to just three field goals in 15 attempts. A 6-1 senior, Green was just five of 11 at the line and finished with 11 points.  On January 15, 1992, his three timely three-pointers sparked the Wildcats at Vanderbilt, where he finished with nine points.

On April 28, 1992, Pitino announced that senior-to-be Braddy and juniors-to-be Gimel Martinez and Jamal Mashburn would be named captains of the 1992-93 Wildcats basketball team.  As a senior, Braddy saw action in 33 games and averaged nearly 4 points per game.  In the preseason, Braddy said he wanted to leave a lasting impression on the Kentucky program as a senior. His 24 minutes helped the Cats beat Indiana 81-78 on January 3, 1993.  Braddy got into the game in the first two minutes after Rick Pitino benched starting shooting guard Dale Brown for giving up a three-pointer. Braddy’s eight points included a pair of three-pointers during UK’s blitzkrieg of first-half treys.  Braddy defended Damon Bailey’s missed three-point attempt in the final seconds.  “He’s been great in practice and it’s carrying over into the games,” Pitino said. “Today, he gave us a big effort.”  On his pregame radio show, Pitino said Braddy had worked into the backup point guard role behind Travis Ford. Braddy would share the duty with Dale Brown.  On February 10, 1993, Braddy got his first career start against Arkansas.  He played 23 minutes and scored 8 points.  On February 27, 1993, Braddy took his bow in his final home game as a senior and became the first player to play all four years for Rick Pitino at Kentucky.  He played 11 minutes and did not score.  On March 27, 1993, in the 1993 NCAA Southeast Regional finals, Braddy contributed 7 points in 15 minutes of action.  He played at least 20 minutes in six different games.

Braddy averaged 8.7 minutes and 2.9 points a game during his four seasons of basketball at Kentucky. The 6-foot-3 guard left with no regrets.  He graduated from UK in May of 1993 with a bachelor’s degree in communication.

After college, Braddy got a tryout with the New York Yankees and played briefly in the Boston Red Sox system. In May of 1994, Braddy signed to play baseball for the Gulf Coast Red Sox in Fort Myers, Florida.  The following year, he moved up to the Sarasota Red Sox and started in the outfield for the West Division All-Stars in the Florida State League All-Star Game.  In March of 1994, the Boston Red Sox called Braddy up from the minor leagues.