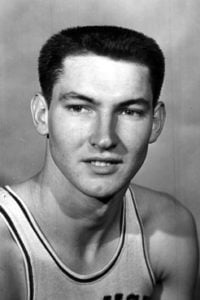 Ray Mills was born September 26, 1933, in Clay County, Kentucky.  Mills, described as a kangaroo walking like a basketball player, was a six-foot-four inch center.  Tremendous springiness made Mills into the most outstanding rebounder in the state high school basketball circles in 1953, as he sparked his Clay County team to an undefeated season, which included 35 consecutive victories. They advanced to the quarter-finals of the State Tournament before they were eliminated by Lexington Lafayette.  The Generals held Mills to just two field goals and 14 points and went on to win the state title.  The wearer of a perpetual smile, the jumping jack pivotman was a unanimous All-Tournament selection; he was classed by many press observers and coaches as one of the best prospects in the state since Cliff Hagan who became an All-American at Kentucky.  In 1953, he scored 45 points in a game which was a Clay County school record until 1974 when Gary Gregory scored 50.  Mills scored 833 points during the regular season and 1,019 total, for a 24.5 average in his senior year of high school.

Wallace (Wah Wah) Jones, former All-America at the University of Kentucky, believed that Clay Mills had a brilliant future resting in his lap.  “That boy has great potentialities, but he needs to learn several different movements—and I believe he will be a great college player.”

As a freshman at Kentucky (freshmen were not eligible to play varsity back then), Big Ray Mills led the frosh squad in scoring with 18.3 points per game and in rebounding. He scored 18 points against Georgetown College’s “B” team in December 1953.  On January 11, 1954, he scored 28 points against Ashland Junior College.  He scored 21 points against Campbellsville College in February of 1954.

As a sophomore, Mills was considered a strong candidate for a starting forward berth on the basis of his outstanding play as a freshman.  He possessed a good jump shot and was equally effective with his two-hand set shot. He drove exceptionally well and used his 6-4 frame to give a good account of himself on the boards. Tremendous spring in his legs made Mills into one of the most remarkable rebounders for his size seen at Kentucky in many a year.  He scored 24 points and grabbed 13 rebounds in a win over Temple on January 1, 1955.  That turned out to be his career high.  He scored 72 points on the season giving him a per-game average of 3.1.

Shortly before his junior season began, Mills suffered a thigh injury.  He “can’t even pose for pictures,” as Adolph Rupp put it.  Mills saw more action than any other reserve role player during his junior season.  He scored in double figures four times but only managed 91 points total.  He averaged 3.9 points per game.  He didn’t shoot the ball enough to be a big-time scorer but he was known to be a demon on the boards.

Before his senior campaign had started, Mills had apparently won a starting job at forward when, on November 14, 1956, he suffered a broken jaw when he collided with sophomore Johnny Cox during a scrimmage session. At first, he thought the injury to be slight, but an examination the next day revealed the fracture.  He missed the first four games of the season.  His injury made room for Rupp to start Johnny Cox.  Mills finally saw his first action in the fourth quarter against Maryland on December 15, 1956. Mills averaged 4.8 points and 5.6 rebounds per game as a senior, helping to guide Kentucky to its 17th Southeastern Conference title.

He also competed in the high jump for the track team.

In 1958, Mills was named the head basketball coach at Wayne County High School in Monticello, Kentucky.  He resigned in 1963.

He was inducted into the KHSAA Hall of Fame in 2004.