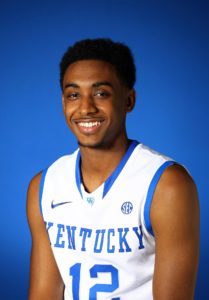 Sophomore: Scored in double-figures in 18 of his last 24 games … Scored 13 points in win over Florida … Led all scorers with 19 points in win over Mississippi State while grabbing seven rebounds and handing out a game-high four assists … Grabbed a career-high eight rebounds in win against Missouri while also totaling 16 points and six assists … Scored 12 points, grabbed five rebounds and four assists to no turnovers in win over Vanderbilt … Totaled 12 points, including 5-of-6 from the free throw line in win over Auburn … Also recorded career-high two blocks against the Tigers … Was a perfect 6-6 from the field with 12 points, four assists and two rebounds in win over South Carolina … Logged a career-high 41 minutes in win at Texas A&M … Scored 13 points, tying season-highs in free throws and free throws attempted (6-9) in win at Ole Miss … Posted 12 points, eight assists and five rebounds in win at Auburn … Scored 14 points, while tying a career-high with 39 minutes of action against Texas A&M … Scored team-high 16 points in SEC debut victory over Vanderbilt … Grabbed four rebounds and dished our four assists in same game … Totaled 15 points on a career-best 4-of-5 shooting from 3-point range against Eastern Michigan … Also recorded career-high four steals against Eagles, while dishing out season-high eight assists … Tallied 17 points while pulling down a career-high five rebounds in game against Louisville … Scored a career-high 23 points in win over Marshall on 10-of-17 shooting … Finished with 12 points in 31 minutes against Lipscomb … Finished Portland game with eight points, four rebounds and six assists … In 21 minutes against Samford, dished out four assists … In 18 minutes vs. Baylor, scored two points, while grabbing three rebounds and handing out two assists … Tallied two points, a rebound and a steal in nine minutes against Notre Dame, his first action since the season opener … Limited to just 10 minutes in the season-opener against Maryland due to flu-like symptoms … Dished out two assists and blocked a shot against the Terrapins.

Sat out the season due to NCAA transfer regulations.

Freshman: Started seven of the final eight games of the season at point guard, and 10 of the last 15 overall … He came off the bench in the first 16 games of the season … Returned to action at Duke on Feb. 5 after missing two games due to illness … In the nine games since he came back he averaged 5.7 points, compared to 11.4 points in the five games before he got sick … Tied for fourth on the team in scoring (9.3) and second with 3.3 assists per game … Ranked seventh in the ACC in assist/turnover ratio (1.9) … Would have led the ACC in free throw percentage, but he did not have enough made free throws (2.5 per game) … Has hit 87.0 percent (67-77) from the line … Scored 12 points in the ACC Tournament against Maryland … Earned his first career start at Florida State, scoring 17 points in 21 minutes … Named the ACC Rookie of the Week on Dec. 15 after his performance against USC Upstate … Came off the bench to score a career-best 20 points on 10-of-13 shooting … Also dished out five assists to zero turnovers and added three steals … Recorded his first career double-double when he had 11 points and 10 assists against East Carolina at the Charleston Classic.

A third-team Parade All-America selection … Played at Walton High School in Marietta, Ga. … Coached by Joe Goydish … Named the Georgia Gatorade Player of the Year as a senior … Was the Georgia 5A Player of the Year … Named Mr. Cobb County Basketball as well … Finished with more than 2,000 career points in just three years at Walton … Averaged a county-high 31.4 points as a senior … Also named Georgia 5A all-state first-team selection and Mr. Cobb County Basketball as a junior … Averaged 27.8 points, 6.0 assists, 3.1 steals as a junior … Played part of his sophomore season at Concord (N.C.) Cannon School … Was leading the team with 16 points and five assists a game, before transferring back to Walton High School … After his senior season, played in the Derby Festival Classic and the Capital Classic … Played in the Adidas Nations Tournament in France in the summer of 2009 … Ranked the 25th-best overall prospect by Scout.com and the No. 8 point guard and a five-star prospect … The No. 19 player nationally and No. 7 point guard according to Rivals. com … Ranked No. 39 on the ESPNU 100 list … No. 19 nationally according to PrepStars.com.