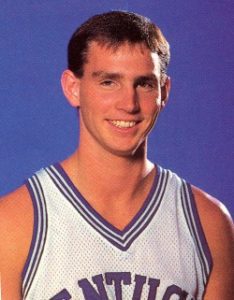 Sean Sutton was born Sean Patrick Sutton on October 4, 1968, in Twin Falls, Idaho to Patsy Wright and Eddie Sutton.  During his childhood, he was often picked up by a student manager and driven to the University of Arkansas, where he would watch his father put the Razorbacks on the college basketball map. He would observe Eddie Sutton’s practices every day, sitting for hours, mesmerized by the action and fascinated by the game his father taught.

In high school, Sutton played for Henry Clay High School in Lexington, Kentucky, where he averaged 19.2 points and 5.3 assists his senior year in 86-87 to lead Henry Clay to a 22-4 record. He also shot 56 percent from the floor and 72 percent from the charity stripe while earning All-State honors for the second consecutive season.  Sutton played in the Dapper Dan and Derby Classic All-Star games in the spring of 1987. In the Derby Classic, Sutton scored 19 points in leading the South squad to victory, earning Most Valuable Player honors in the process.  He also participated in the Kentucky-lndiana series after his senior year.  As a sophomore in Fayetteville, Arkansas, Sutton was named the “Sophomore of the Year” in Arkansas.

On November 7, 1986, Sutton announced that he would be playing for his father at Kentucky.  He chose Kentucky over Michigan.  “I chose Kentucky for three reasons. One, it’s great tradition. Two, it’s great fan support. Three, because of the man who coaches this team, the man I’ve always wanted to play for, the man who’s my idol.”

As a freshman at Kentucky, Sutton saw action in 23 games averaging 6.7 minutes a game.  He averaged 1.3 points and 0.4 rebounds a game.  Sutton played in one NCAA Tournament contest, against Southern.  He scored a career-high nine points against Alaska and dished out career-high five assists against Cincinnati and Ole Miss.  Sutton averaged an assist every 3 minutes of action.  He was described by Coach Sutton as a “pure point guard” because of his ability to get the ball into the hands of the big men.

When Sutton decided to play basketball at the University of Kentucky he knew there would be questions and controversial times.  He knew that no matter what he did, it wouldn’t be enough to please some fans and that they would always believe he got his scholarship only because his father, Eddie Sutton, is the UK coach.  Still, no one could have anticipated just how hostile and unfair the criticism would be.  The sophomore had to endure more mental anguish than many people suffer in a lifetime.  Every move or action was criticized.  Sutton wasn’t the best player ever to wear a UK uniform. He was no Kenny Walker, Kyle Macy or Jack Givens. He had limitations.  But he was not the worst player ever to play at Kentucky as some fans seemed to believe. He could direct an offense and would have been an ideal point guard for many Kentucky teams that have been overloaded with talent. The Cats didn’t have that luxury his sophomore season and every mistake Sutton made became a major topic of conversation.  Still, he averaged 5.8 assists per game to lead the team and averaged just one turnover for every 12.2 minutes he played. Sutton did his best and represented Kentucky well.  He should be remembered for that.

In March of 1989, Sutton’s father, head coach Eddie Sutton, was forced to resign in the wake of an NCAA investigation that slapped Kentucky with three years probation.  Rick Pitino was hired to replace Eddie Sutton and Sean Sutton was put into a position to decide if he would continue to play for Kentucky or go elsewhere.

On June 7, 1989, Sutton announced that he would be transferring from Kentucky because of the NCAA penalties that prohibited Kentucky from playing in the NCAA Tournament the next two years.  “It was a very tough decision for me to leave this place,” said Sutton. “Kentucky has always been very special to me.  I wanted to play here and help Kentucky win a national championship. That was always a dream of mine.  Now the chance for that dream doesn’t exist. I’m not sure I could live with myself if I didn’t have a chance to play in the (NCAA) tournament again.  It was a dream of mine to put on the Kentucky uniform and play in Rupp Arena. I was able to do that for two years and no one can  ever take that away from me.”

On August 3, 1989, Sutton announced that he would be transferring to Purdue but backed out of that commitment because he was burned out and needed a year away from basketball. He later enrolled at Lexington Community College and spent the winter working on his basketball skills under the guidance of his father, who was out of coaching.

On August 6, 1990, Sutton announced that he would be joining his father who had taken the head coaching job at Oklahoma State.